As many as 28 villages in the two Godavari districts were affected by surging waters and several hundreds of villagers evacuated. 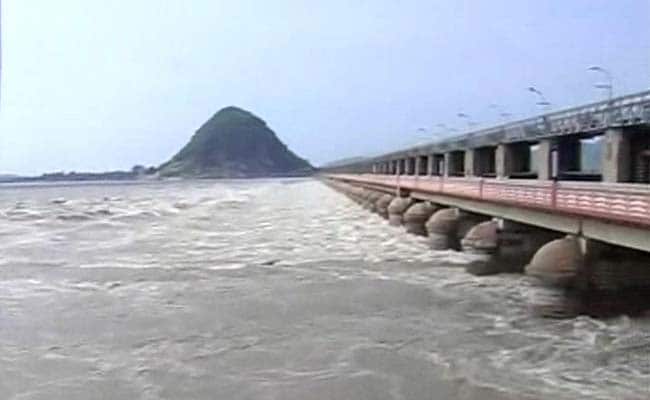 The intensity picked up yesterday and the surging water entered villages on the banks. (File)

With the Godavari and Krishna rivers in spate following rains, the government machinery is on high alert and hundreds of villagers on the banks have been shifted to safer places as many hamlets were inundated, officials said yesterday.

No loss of life or damage to property has been reported, according to the State Disaster Management Authority (SDMA).

Krishna, the second major river in Andhra Pradesh, was in spate as incessant rain in Krishna and Guntur districts over the last two days resulted in a surge in water flow in many rivulets that empty into the river.

As many as 28 villages in the two Godavari districts were affected by surging waters and several hundreds of villagers evacuated.

The intensity of the flow had lessened in Godavari a couple of days back but it again picked up yesterday and the surging water entered villages on the banks.

Standing crops in hundreds of acres in the two districts have been inundated, according to officials.

Chief Minister N Chandrababu Naidu spoke to collectors of rain-hit districts and asked them to be on high alert.

The government has opened 16 relief camps each in West and East Godavari districts for the evacuated villagers.

About 2982 people were lodged in relief camps in East and 6336 in West Godavari district.

Three teams of national disaster response force and six of SDRF, with 80 and 220 personnel respectively, have been deployed in the flood-hit areas in the two Godavari districts.

Besides, 118 personnel of the state disaster response and fire services department are also on duty.

They are using 13 boats and 400 life jackets to ferry stranded people to safety, the SDMA said, adding that three satellite phones are also being used for communication in remote villages.

Medical teams have also been positioned to tackle any emergency.

At Jangareddygudem mandal in West Godavari district, several hundred devotees were stranded at a temple as they were suddenly caught in the rain and surging water.

With rivulets in the region overflowing, road transport facility remained cut-off, forcing them to stay in the temple.

Police reached the spot with difficulty and shifted over 200 people to safety.

Efforts were on to evacuate the others as well, information reaching here said.

Though inflow into the Srisailam reservoir fell significantly, a steady outflow of over 2.39 lakh cusecs has started filling the Nagarjuna Sagar reservoir downstream, where the level rose to 545.4 feet at 5 pm today.

A second warning signal has been raised at the Sir Arthur Cotton Barrage at Dowaleswaram in East Godavari as the discharge crossed 13.71 lakh cusecs, the SDMA said.

The discharge might cross 14 lakh to 15 lakh cusecs by tomorrow because of the heavy inflow from the catchment areas that have been witnessing constant rain.

At Vijayawada, the Prakasam Barrage is filled to the brim following an inflow of 1,27,576 cusecs.

As the barrage reached its storage capacity of 2.84 tmcft, all the water is being discharged into the Bay of Bengal.

The Chief Ministers Office said 1210 tmcft from Godavari and 14 tmcft from Krishna flowed into the Bay of Bengal this season while the storage in various reservoirs in the state touched 420 tmcft.

"We have taken all measures to ensure there is no inconvenience to the people.