Bill on Polavaram Project Passed in Lok Sabha Amid Protests 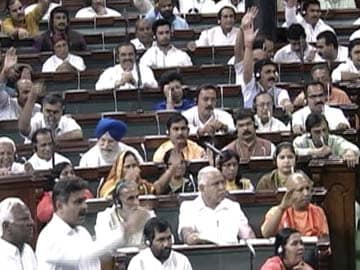 Telanga Rashtriya Samiti, Biju Janata Dal and some other parties were opposed to the bill

New Delhi: A controversial bill which paves the way for the Polavaram project in Andhra Pradesh by merging some villages and mandals of Telangana with Seemandhra was approved in the Lok Sabha today, amid stiff opposition from Telanga Rashtriya Samiti (TRS), Biju Janata Dal (BJD) and some other parties.

As soon as the Andhra Pradesh Reorganisation (Amendment) Bill seeking to replace an ordinance, and a statutory resolution disapproving it, was taken up, TRS members trooped into the Well and BJD members stood up in protest.

Over-ruling their objections, Speaker Sumitra Mahajan observed that it was not necessary to have a separate discussion on the statutory resolution disapproving the Andhra Pradesh Reorganisation (Amendment) Ordinance that the bill seeks to replace and later on the bill, saying it had been done as per the practice of the House.

Maintaining that the bill was introduced after being referred to the relevant Standing Committee, Ms Mahajan also said that interpretation of the law is the primary responsibility of the court of law.

She said her duty was to conduct the proceedings of the House in a proper manner as she ruled out the objections of members.

Her observations came following a point of order raised by Trinamool Congress member Saugata Roy and TRS member B Vinod Kumar insisting that the ordinance itself was "against the spirit of the Constitution".

The TRS members also contended that the ordinance was unconstitutional as it had been brought about when the separate Telangana state had already been formed. Ms Kumar claimed the President, before issuing the ordinance, had not elicited the views of the state legislature and wanted the government to defer bill.

The BJD leader Bhratruhari Mahtab said his party was not against the project itself but "arbitrariness" with which the height of the dam was increased that would inundate 307 adivasi villages in Odisha and Chhattisgarh.

He suggested that the project's design could be altered to ensure that tribals are not affected in any region and said the way things were turning out, there could be no alternative but to approach the courts.
Promoted
Listen to the latest songs, only on JioSaavn.com