Termites In Brazil Built Millions Of Huge Mounds, The Size Of Minnesota

In total, the earth excavated by termites equals the volume of 4,000 Pyramids of Giza, as Martin and his co-authors report in a study published Monday in the journal Current Biology. 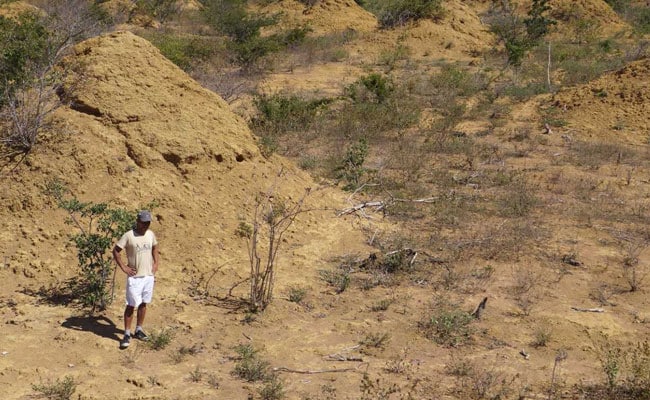 A termite mound field in Brazil. The mounds are found in dense, low and dry forest caatinga vegetation.

In northeastern Brazil, in a forest so dry that the trees blanch bone-white, termites have been busy at work for millennia. The only external signs of their labor are dirt mounds, garbage dumps from their underground excavations. Dirt and garbage normally inspire as much awe as toenail clippings - but these are truly marvelous slag piles.

The conical mounds, each about 8 feet tall and 30 feet wide, erupt from the ground at regular intervals, spaced about 60 feet from each of six neighbors. From the air, the pattern evokes a checkerboard or the hexagonal combs in a beehive. A satellite map, via Google Earth, indicates the mounds cover more than 88,000 square miles, an area larger than Minnesota.

"Imagine it being a city," said Stephen J. Martin, an entomologist and expert in social insects at Britain's University of Salford. "We've never built a city that big." And the centimeter-long termites, Syntermes dirus, did it grain by grain.

In total, the earth excavated by termites equals the volume of 4,000 Pyramids of Giza, as Martin and his co-authors report in a study published Monday in the journal Current Biology. They collected samples from the centers of 11 mounds, and by measuring radiation in the mineral grains, determined the oldest mound tested is about 3,800 years old. Perhaps others are older. Based on satellite images and spot-checks across thousands of kilometers, the scientists estimate 200 million mounds dot the landscape.

If the forest cover vanished, exposing the mounds in all their splendor, this place would be celebrated as a natural "wonder of the Earth," Martin said.

Yet tucked under trees and thorny brush, the mounds can be hard to spot. Martin failed to notice them at first. He'd traveled to the Brazilian dry forest, called the caatinga, in pursuit of honeybees. Only after miles of driving, where the road sliced through the trees to reveal the mounds' gumdrop shape, did he see them. These were termite mounds, the local residents told Martin.

"No, that can't be right - there's too many of them," he recalled thinking. Back in Britain, colleagues told him the mounds must be lake sediment or another geological feature.

The locals, of course, were correct, as Martin found out when he returned. Miles from any major city, while walking near a swimming hole, the entomologist bumped into another biologist, named Roy Funch.

"He was walking up the river with a friend, and I was walking up the river to go swimming," said Funch, a co-author on the new paper. Martin "looked like, obviously, an outsider," so Funch, who also works as a tour guide, moseyed up, said hello and asked what brought Martin to Brazil. The termite mounds, Martin said, lamenting that nothing about them turned up in Google Scholar.

"I said, 'Hey, you just met the only guy in Brazil who's working on these mounds,'" Funch recalled. "So, you know, 'serendipitous' is putting it lightly."

Funch had traveled to Brazil in the 1970s with the Peace Corps. The beautiful mountains and hiking trails persuaded him to settle in the country's northeast, he said. He fell under the mounds' spell, too. The tallest, which Funch calls "grandmother mounds," reach 15 feet into the air. (Not all of them are still active.)

"I don't think anyone has ever seen such a modification of the landscape at such a huge scale by such tiny little creatures," he said.

In the 1980s, Funch, who describes himself as a "backwoods scientist" but has a PhD in botany, wrote about the termite mounds for a popular science magazine. He hoped to catch other researchers' attention. Nobody bit. Thirty years passed, and he decided to study them himself, until he teamed up with Martin.

These mounds, unlike the hives other termites build, are not nests or ventilation shafts. "We thought that the nests would be in the middle of the mounds," Funch said. "They weren't. They weren't even under the mounds." A single large tunnel, about 10 centimeters (about four inches) in diameter, rises through the center of the mound. The termites deliver their waste and plug the tunnel at the top.

"No one has ever found the queens' nests. We really don't know what's happening below the ground. Absolutely nothing," Funch said.

The mounds make uncooperative subjects. Soldier termites emerge when researchers disturb the dirt. They'll draw blood, Martin said. "They've got razor-sharp mandibles. They'll slice straight through the skin," he said. The nutrient-poor soil is a nightmare to dig up, baked hard as concrete in the heat.

Remoteness and poor soil are the very qualities that enable the termite mounds to endure. The area has long droughts, said University at Buffalo geographer Eun-Hye Yoo, an author of the study. (Yoo also met Funch in a Brazilian tourist town. "It's a good place to meet people," he said.) The climate, though not friendly to human agriculture, is stable. In this harsh environment, the termite kingdom flourishes.

"These termites have exploited this area and done very well for themselves," Martin said.

The wet season lasts for about a month. The caatinga leaps from brown to green and back again. The trees bloom, and just as quickly they shed their leaves. Within weeks, the forest floor is stripped bare of leaf litter. The termites take everything to eat. Martin suspects the litter sustains them for the rest of the year. Termites elsewhere farm fungus on leaf detritus, but there are no known fungus-growing termite species in South America.

The scientists do not have a definitive explanation for the mounds' unusual hexagonal spacing. The pattern is "absolutely striking and quite unusual in its scale. It's a beautiful example of large-scale self-organization," said Corina Tarnita, a mathematical biologist at Princeton University who was not involved with the new work. The only comparable pattern in nature so widely distributed, she said, are African fairy circles, rings in the brush that appear from Angola to South Africa.

But Martin proposed that, because these social insects "are very, very good at optimization" the six-pointed system may be the most efficient. Beneath the dirt, as seen by fiber-optic cable, is a large and interconnected tunnel system. The termites guide themselves by pheromones, the insect equivalent of a subway conductor.

"When you've got enough connections, it's very easy to find the nearest mound," Martin said. Only if a mound does not exist at the edge of the megacity will they begin to build a new one.

Tarnita cautioned that the mounds tested in this study were done so haphazardly. "It would be really important to have a systematic assessment of age that gives some sense of the relationship between a mound's age and that of its neighbors, or its neighbors' neighbors," she said.

Martin agrees there's plenty of work to do. No one knows how closely related the animals are at the far fringes of the empire. Their genetics are untested. And the colonies' rulers remain a mystery. "We'd love to get to the royal chamber," he said. He'd sacrifice a marvelous mound or two to a backhoe, for science.

(Except for the headline, this story has not been edited by NDTV staff and is published from a syndicated feed.)
Comments
termite mounds BrazilTermites Brazil4000 year old termite Mounds