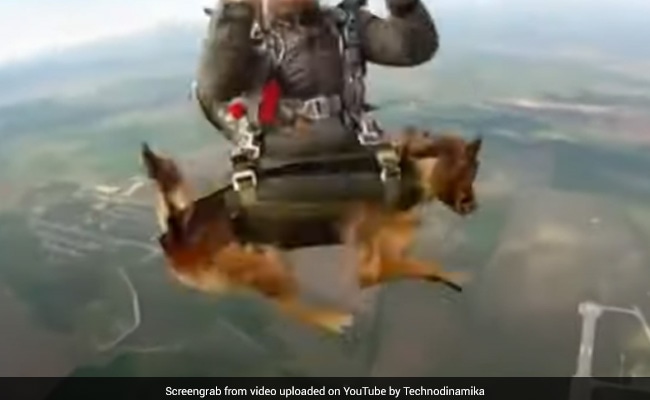 After the system is strapped on the human and the dog, they set off for skydiving, shows video

Russia has developed a new parachute system that can help transport military service dogs to places where an aircraft cannot land. The equipment is undergoing a final testing stage. Technodinamika, the aviation holding company that is responsible for this new kind of parachute, released a video of some tests and interviews on their YouTube and Instagram pages. Their statement said that the equipment was not available in Russia earlier but now it could help a person to paratroop with an official dog to carry out search and military operations in places where an aircraft could not land. They said their system could be used both for a single skydive with a dog and in tandem.

The video showed military troopers ready with their trained dogs on board an aircraft. The parachute entrapment is different as it has a strapped pocket where the dog can be carried in front of the human. After the system is strapped on the human and the dog, they set off for skydiving. Fortunately, the equipment works well, and no animals were seen harmed in the process.

“We conducted a full cycle of development: from documentation to preliminary trials,” said chief parachuter Alexey Kozin, as reported by Technodinamika on their Instagram post. He added that the system was, thereafter, transferred to the Ministry of Defence of Russia.

Andrey Toporkov, who was also interviewed, said that even if the moment of leap could be stressful for both humans and dogs, they have found the canines to calm down very soon. He also mentioned the benefits of this parachute. Earlier, when troopers were unable to take their trained dogs to their operations, they had to meet another dog (which was already present at the site) in advance and pet it.

While this equipment is undergoing final testing, it is supposed to be completed by the end of 2021 and is expected to be presented at the “Army-2021" forum.