The explosion released as much energy in 20 seconds as the Sun does in nearly 10 days. 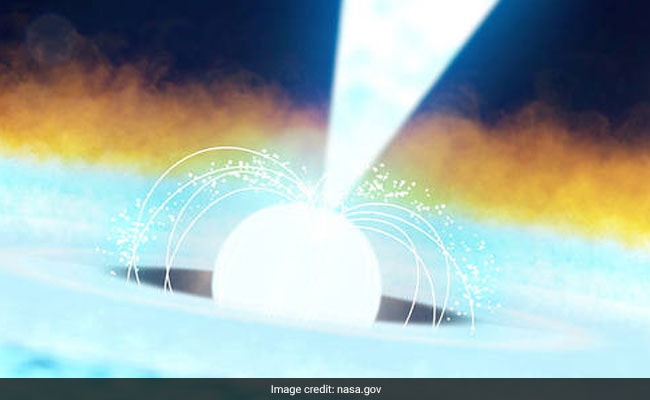 The X-ray burst, the brightest seen by NICER so far, came from an object named "J1808".

The explosion released as much energy in 20 seconds as the Sun does in nearly 10 days.

The X-ray burst, the brightest seen by NICER so far, came from an object named "J1808".

The observations reveal many phenomena that have never been seen together in a single burst.

"This burst was outstanding. We see a two-step change in brightness, which we think is caused by the ejection of separate layers from the pulsar surface, and other features that will help us decode the physics of these powerful events," said lead researcher Peter Bult, an astrophysicist at NASA's Goddard Space Flight Center in Maryland.

The detail NICER captured on this record-setting eruption will help astronomers fine-tune their understanding of the physical processes driving the thermonuclear flare-ups of it and other bursting pulsars.

"J1808" is located about 11,000 light-years away in the constellation Sagittarius.

It spins at a dizzying 401 rotations each second, and is one member of a binary system. Its companion is a brown dwarf, an object larger than a giant planet yet too small to be a star. A steady stream of hydrogen gas flows from the companion toward the neutron star, and it accumulates in a vast storage structure called an accretion disk.

Astronomers employ a concept called the "Eddington limit", named after English astrophysicist Sir Arthur Eddington, to describe the maximum radiation intensity a star can have before that radiation causes the star to expand.

This point depends strongly on the composition of the material lying above the emission source.

"Our study exploits this longstanding concept in a new way," said co-author Deepto Chakrabarty, a professor of physics at MIT.

"We are apparently seeing the Eddington limit for two different compositions in the same X-ray burst. This is a very powerful and direct way of following the nuclear burning reactions that underlie the event."

A paper describing the findings has been published by The Astrophysical Journal Letters.

(Except for the headline, this story has not been edited by NDTV staff and is published from a syndicated feed.)
Comments
NASAthermonuclear blast