Scientists explained that the bright light that came towards Earth resulted from a star straying too close to a supermassive black hole, ultimately meeting its end there as it was ripped to shreds. 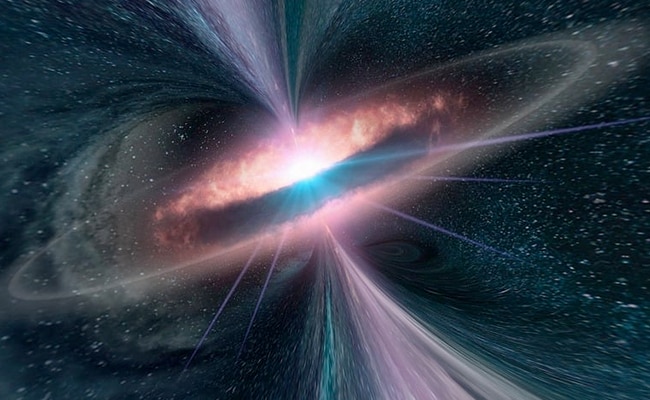 An incredibly bright flash that appeared in the night sky in February came from a black hole pointing straight at Earth, astronomers have said. This discovery marks the farthest such event that scientists have ever reported and the first instance in which one was detected using visible light.

Scientists explained that the bright light that came towards Earth resulted from a star straying too close to a supermassive black hole, ultimately meeting its end there as it was ripped to shreds. The rare cosmic event occurred 8.5 billion light years away from our planet. The signal from the luminous explosion, known as AT 2022cmc, was first picked up by the Zwicky Transient Facility at the California Institute of Technology's Palomar Observatory on February 11.

As per astronomers, when stars get too close to a black hole, they are torn to shreds and the blast can be detected throughout the universe. This event is known as a tidal disruption event or TDE. Astronomers have observed such events before, however, AT 2022cmc is brighter than any previously discovered. And it is also the most distant ever observed.

According to CNN, scientists believe that when the black hole gobbled up the star, it released a massive amount of energy and sent a jet of material streaking across space at near the speed of light. It is likely that the luminous explosion appeared so bright in our sky because the jet was pointed directly toward Earth, creating what is known as a "Doppler-boosting" effect.

In the paper, the astronomers said that typically, gamma-ray bursts, the powerful jets of X-rays released as massive stars collapse, explain the brightest flashes in the night sky. "However, as bright as they are, there is only so much light a collapsing star can produce. Because AT 2022cmc was so bright and lasted so long, we knew that something truly gargantuan must be powering it - a supermassive black hole," said the Nature Astronomy study's coauthor Dr Benjamin Gompertz.

Also Read | Bats Growl At Each Others Like Death Metal Singers, Says Study

Further, researchers determined that AT 2022cmc was "100 times more powerful than the most powerful gamma-ray burst afterglow" previously recorded, according to Dheeraj Pasham, study author of the Nature Astronomy paper. Astronomers still don't understand why some tidal disruption events create these jets, while others don't. They said that now observing more events like this could reveal how black holes launch such powerful jets across space.