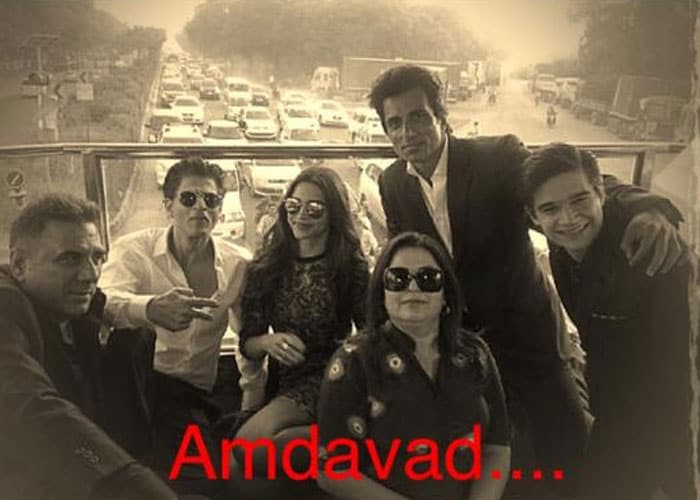 Actor Shah Rukh Khan posted this image of him alongside actors Deepika Padukone, Boman Irani, Sonu Sood and Farah Khan from their journey on the promotional tour bus in Ahmedabad on October 12. 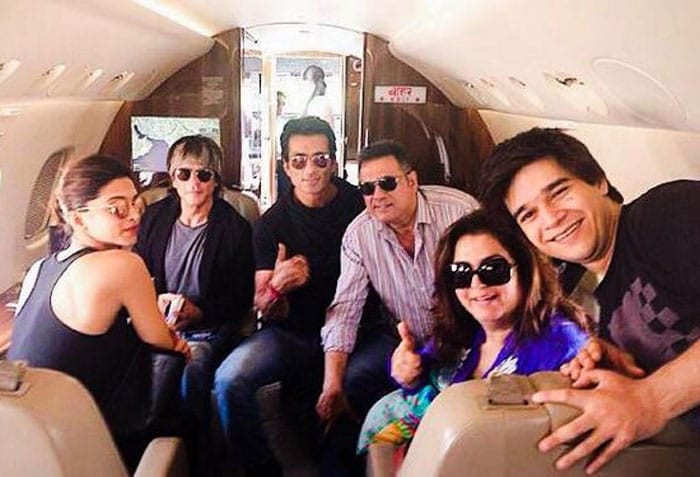 The team landed in Ahmedabad on the morning of October 12. 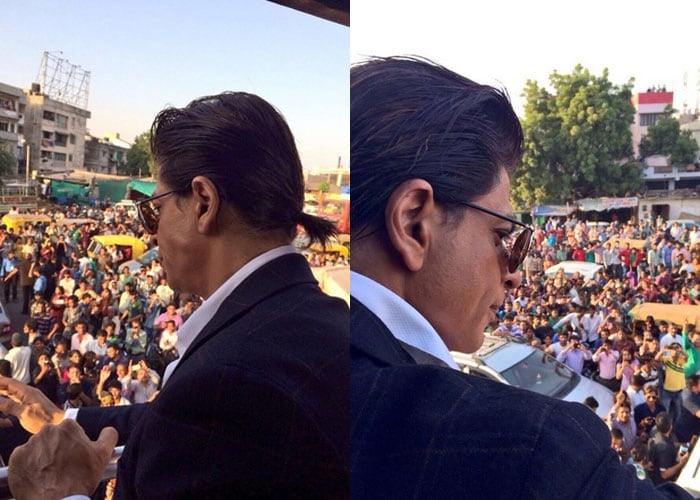 Crowds gathered all over the city to catch a glimpse of King Khan, and his Happy New Year team, who waved at them from the top of their open roof bus. 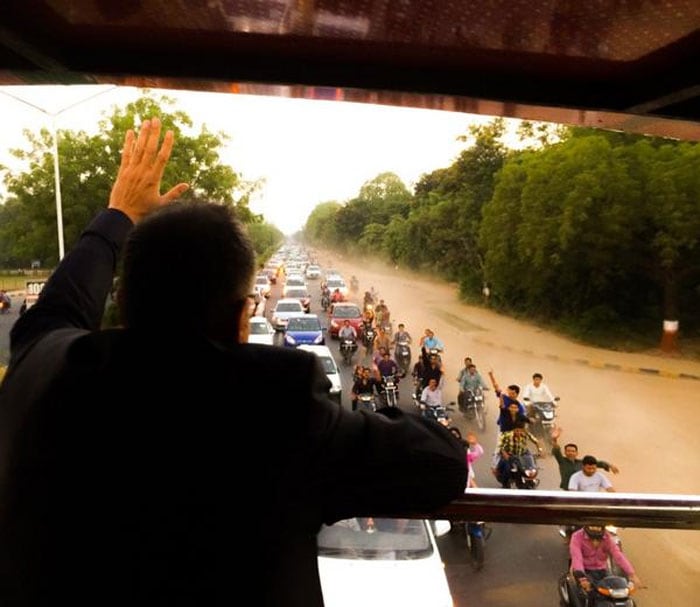 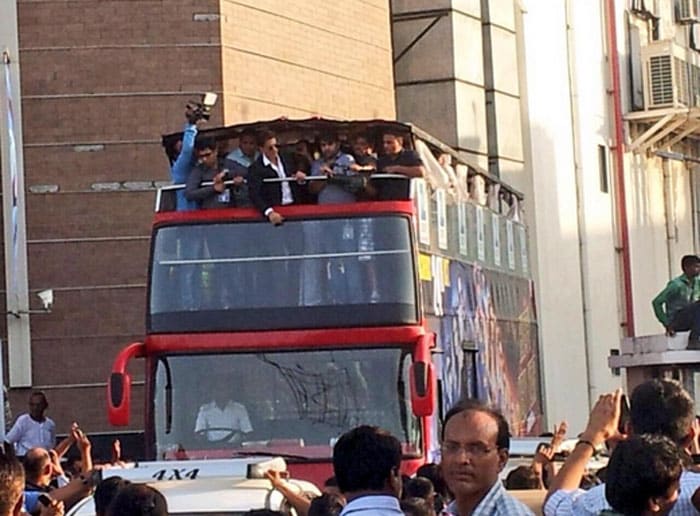 After the bus ride, the team shot for another episode of Dil Se Naache Indiawaale in the city. The shooting lasted well into the wee mornings of October 13. 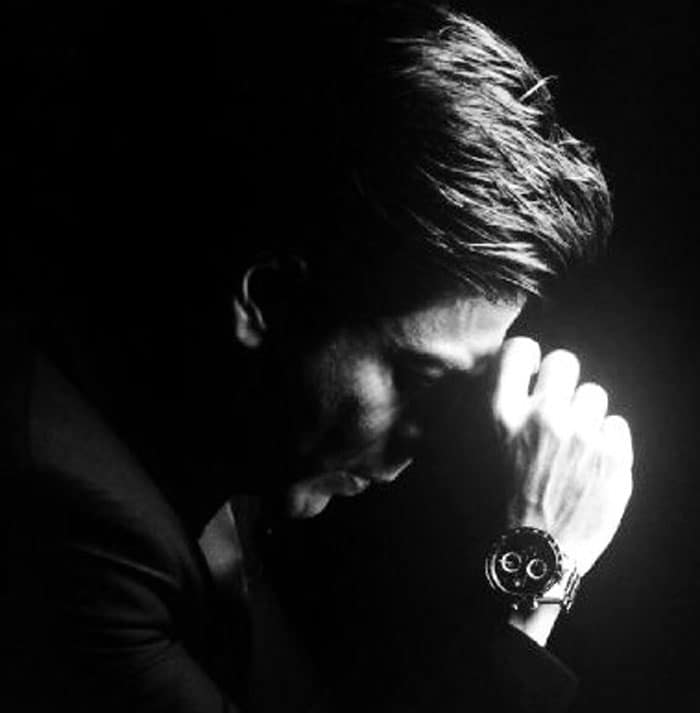 Superstar Shah Rukh Khan, who will next be seen in Happy New Year, struck a rather introspective pose on Twitter. King Khan shared a picture of himself in deep speculation looking for all the world like Rodin's Thinker, and captioned it "Sometimes when it looks like I'm deep in thought I'm just trying not to have a conversation with people. Pete Wentz. "

Coming Up: Before He Was the Badshah, SRK Had Curlers in His Hair 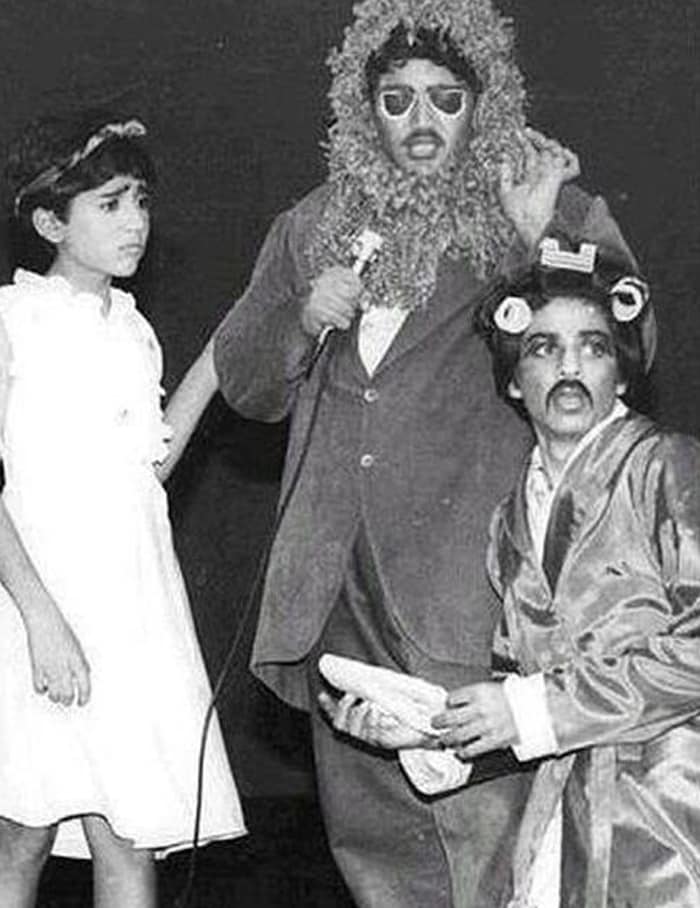 Bollywood superstar Shah Rukh Khan is almost unrecognisable in this photo from way back when he was just a mere mortal. Young SRK, with fake moustache and curlers in his hair, engages a ‘lion' in conversation. This could be a photo from the adaptation of The Wizard of Oz (hello, Cowardly Lion) that SRK was cast in while at school at St Columba's in New Delhi.

SRK tweeted this picture, captioning it: How is this for varied roles!! How many actors with mustache & curlers have had a meaningful dialogue with a lion?' 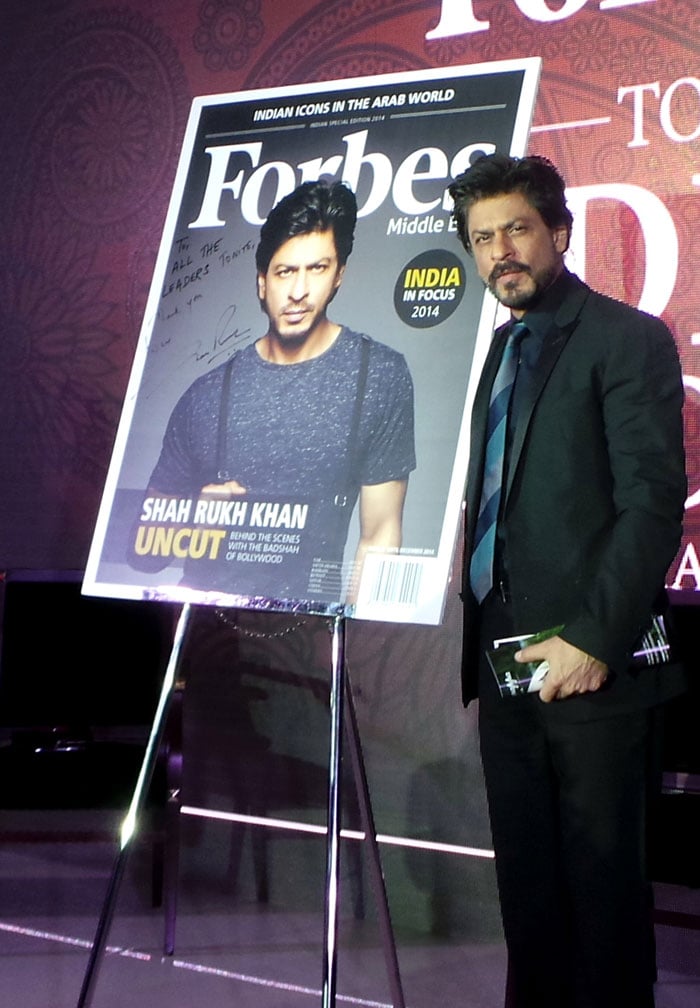 Shah Rukh Khan launched the special Middle-East edition of Forbes magazine featuring him on the cover at an event in Dubai on May 13. 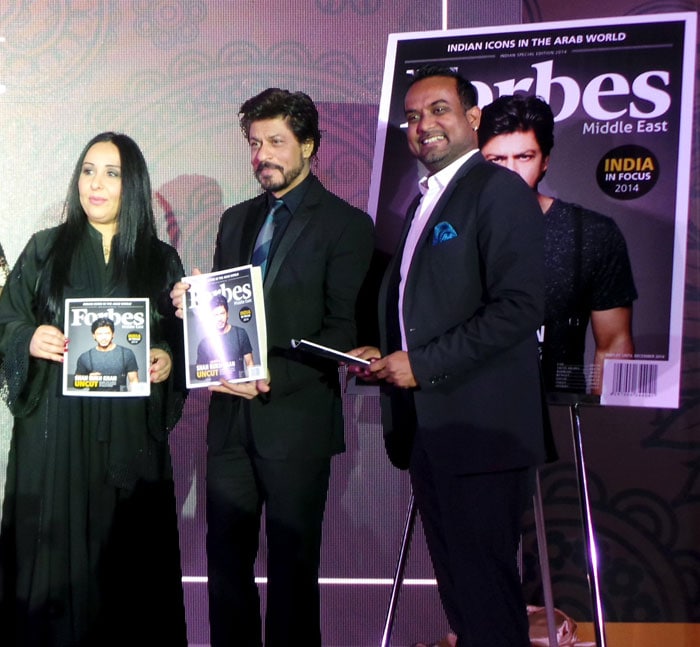 The event was held at the Godolphin Ballroom in Jumeirah Emirates Towers . 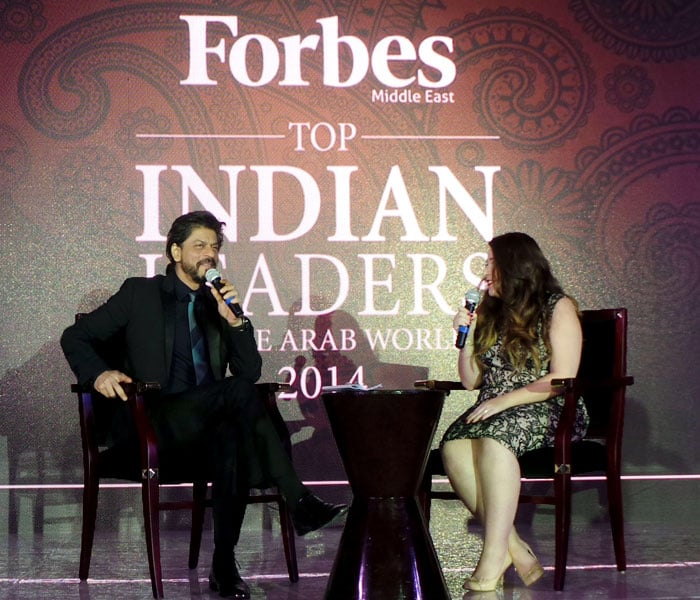 Shah Rukh has been ranked number one out of 170 in Forbes 'Top Indian Leaders in Arab World' list.

Shah Rukh talks to the audience at the event. 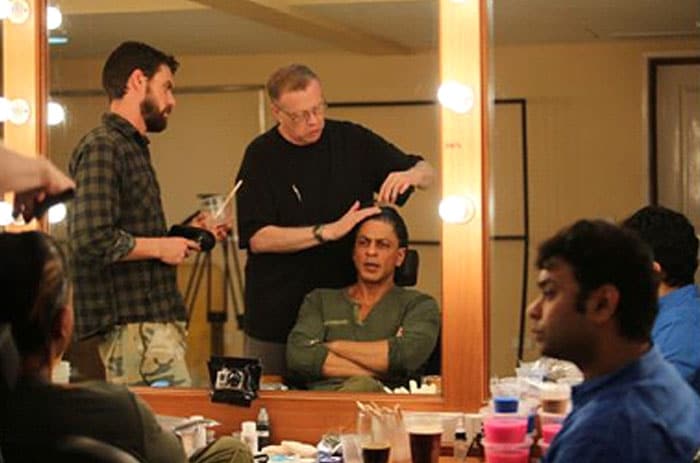 This is Shah Rukh Khan getting his hair and make-up done in a Mumbai studio as prep for his new film Fan. Looking on is Fan director Maneesh Sharma.

This behind-the-scenes glimpse is pretty much all we're going to see of SRK until the makers decide otherwise. Maneesh Sharma said in a statement, 'We are attempting a never-seen before look for Shah Rukh which will be both challenging for us and exciting for the viewer. Understandably, this will be kept under wraps till the first look of the film is revealed.' Helping develop SRK's look is make-up master Greg Cannom who worked on The Curious Case Of Benjamin Button and Mrs Doubtfire.

Fan, produced by Yash Raj Films, is currently in pre-production and will begin shooting in July. It's scheduled to release in August 2015.

Coming up - SRK: King of all times 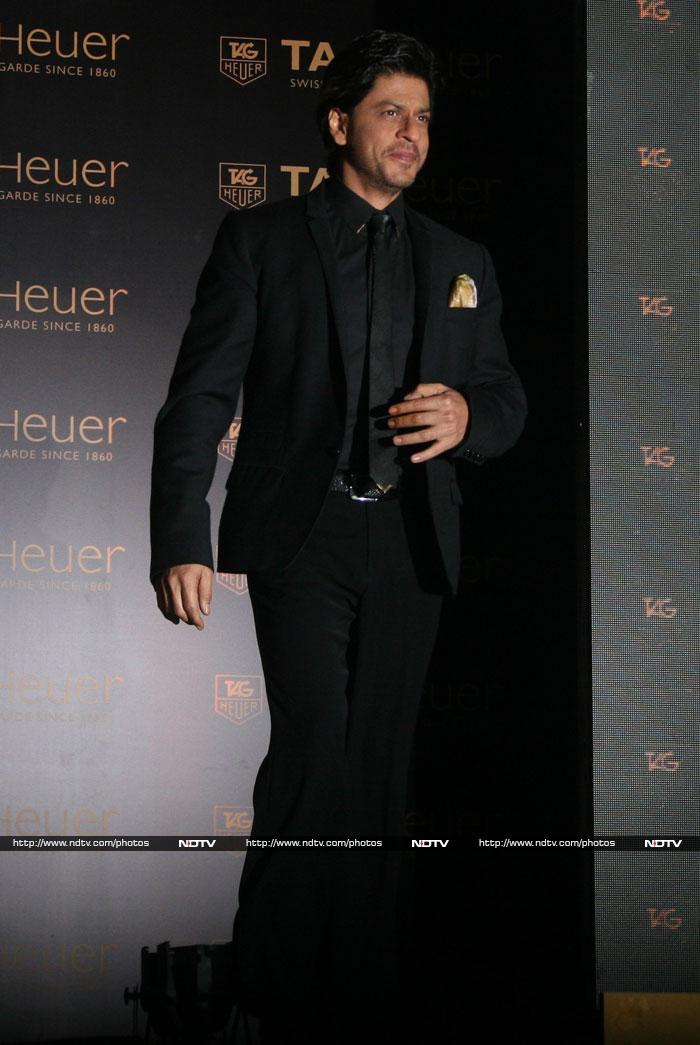 Bollywood superstar Shah Rukh Khan was seen at the unveiling of Tag Heuer's new collection of watches to mark the golden jubilee of its Carrera series in Mumbai on March 3.

Dressed in black, SRK looked dapper and charming, as usual. 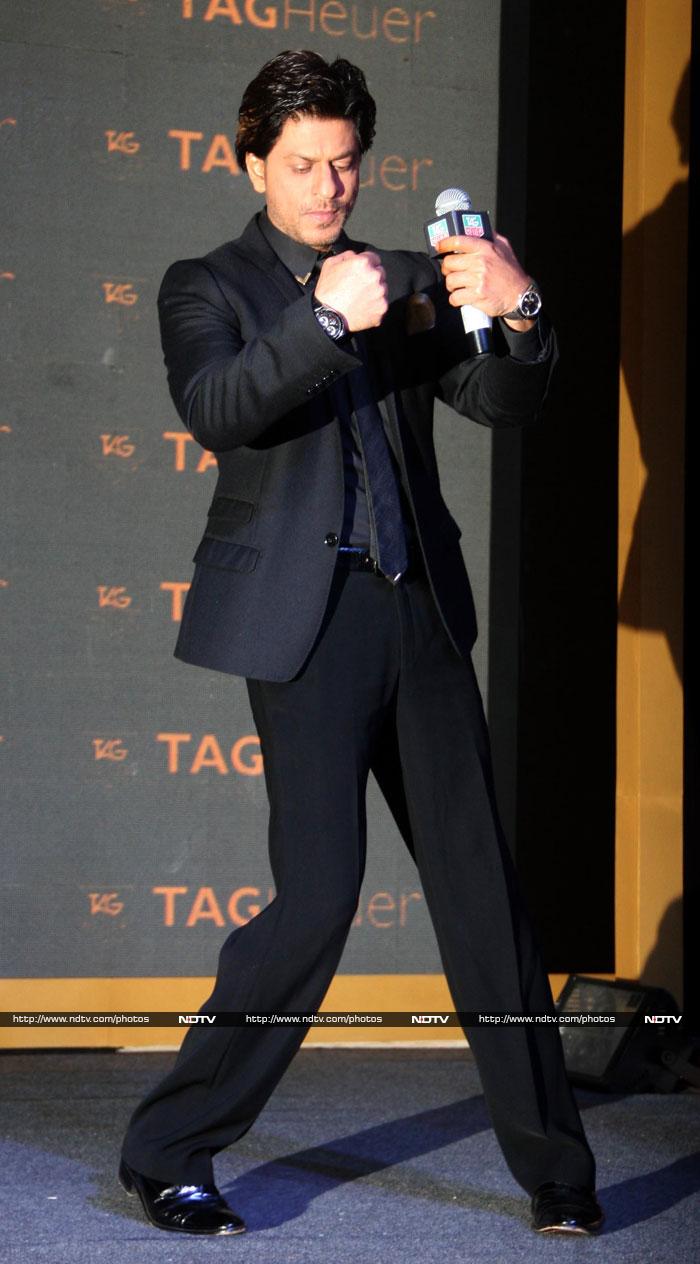 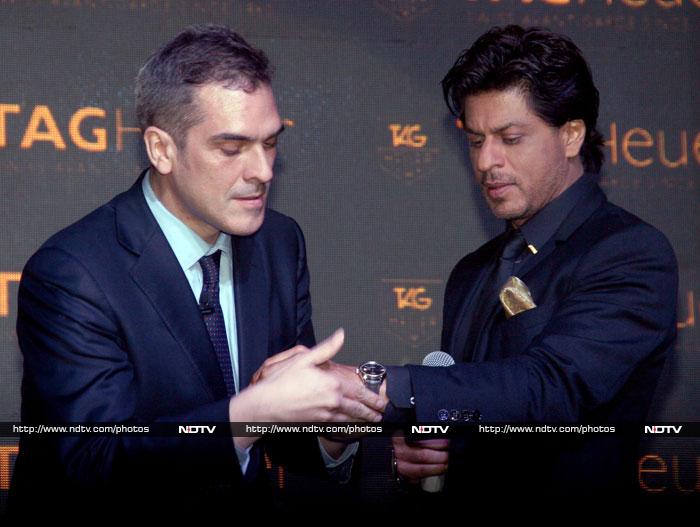 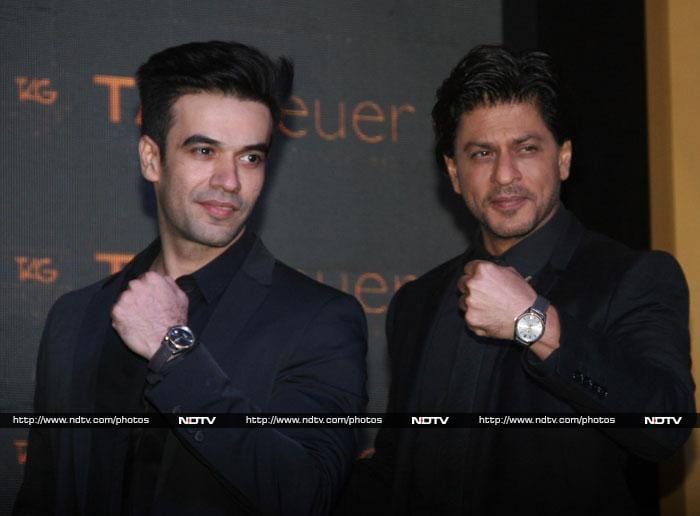 Director Punit Malhotra was also spotted at the event.

Coming up: Suhana is now a carbon copy of mum Gauri Khan 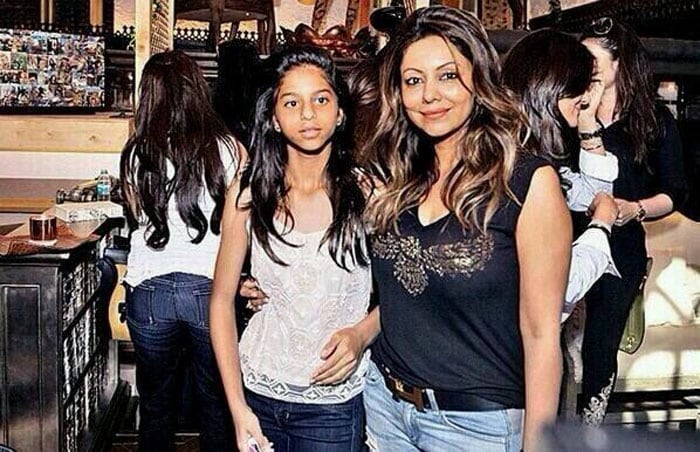 It wasn't just husband Shah Rukh Khan who supported Gauri during the launch of her concept home store Design Cell in Mumbai, daughter Suhana was also present as her mother's cheerleader. Both mother and daughter looked really smart in their sleeveless tops and jeans as they posed for a photograph together.

Coming up: 'Designed' for each other: SRK, Gauri 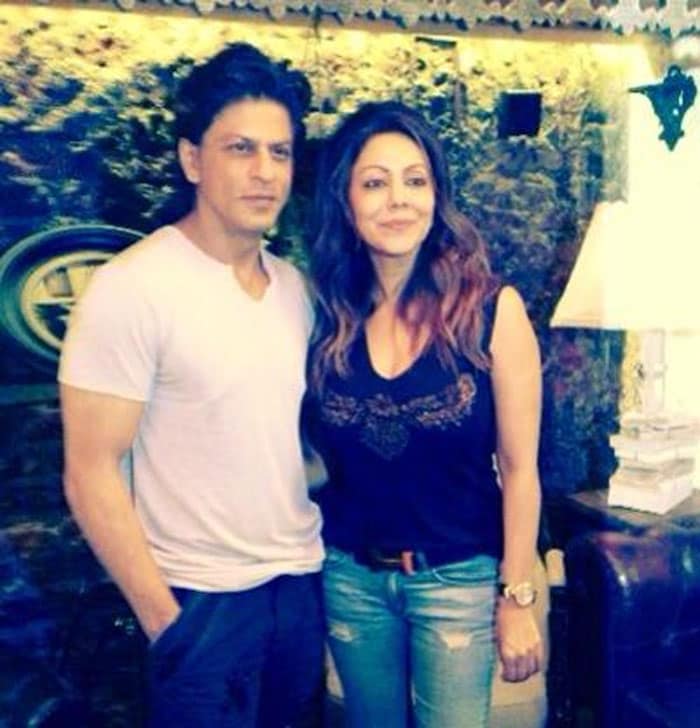 We stumbled across this picture of Bollywood actor Shah Rukh Khan and wife Gauri at the launch of her concept home store Design Cell at Raghuvanshi Mills in Mumbai.

The Chennai Express star has always shown immense support for his wife through all her efforts and the streak seems to continue.

He tweeted this image along with a string of praises for her entire team. 'Chaotically beautiful. Exquisite. The Design Cell exudes Gauri's personality. Extremely proud of her. Awesome team too,' King Khan wrote.

Coming up: For SRK, with love from Junior B 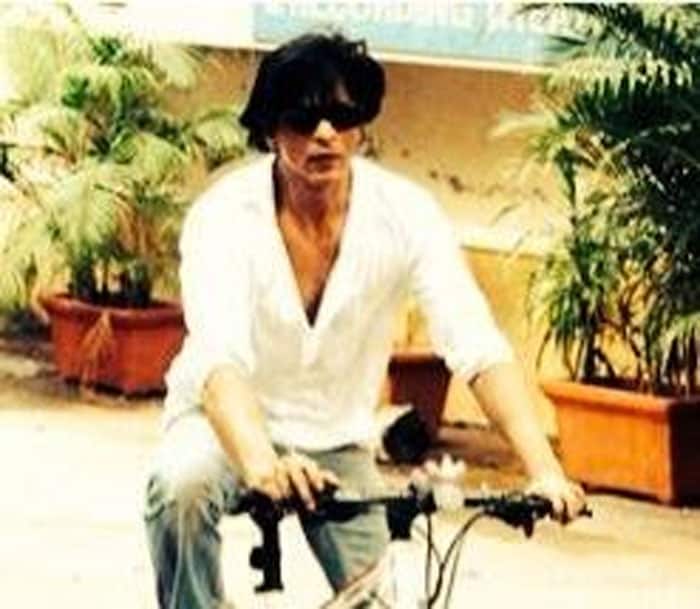 We stumbled upon this picture of Bollywood actor Shah Rukh Khan riding a bicycle gifted to him by his Happy New Year co-star Abhishek Bachchan. We must say that life has come full cycle for the actor. There have always been rumours of a rivalry between the elder Mr Bachchan and SRK which reportedly began when SRK replaced Amitabh Bachchan as host on season three of the show Kaun Banega Crorepati. SRK's one-time rift with Abhishek's wife Aishwarya is also well known. However, all that seems to have changed ever since the Bachchans invited SRK and Gauri to Big B's 70th birthday bash. Now, the Khans are regulars at Bachchan dos and have been spotted at their Diwali party held last year and more recently at Abhishek's birthday party.

SRK tweeted: They say on a cycle the passenger is the engine, so is true in life. Thanks @juniorbachchan for the new ride. Love u. 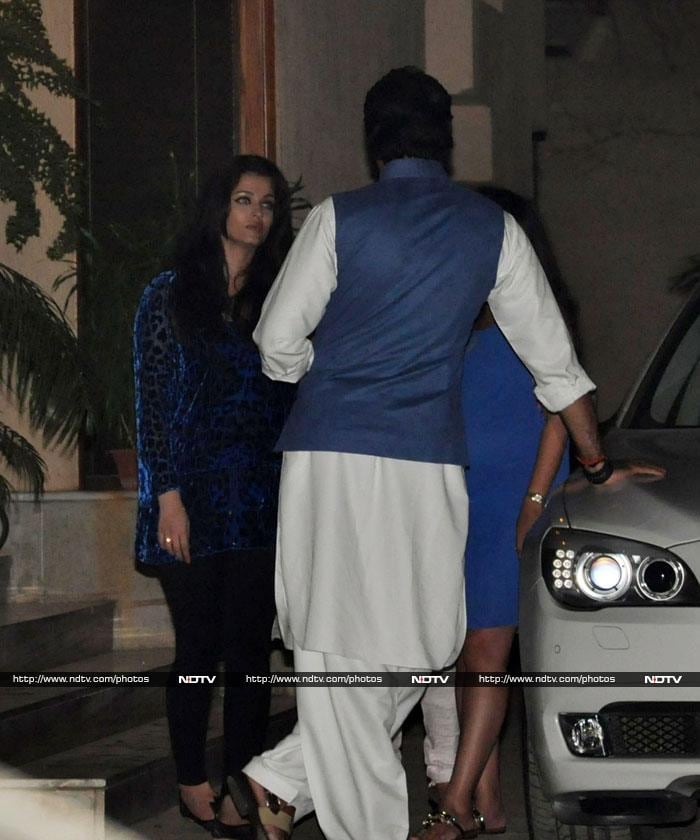 Abhishek Bachchan celebrated his 38th birthday on February 5 and invited his film frat friends to a party at the Bachchan home, Jalsa. Wife Aishwarya Rai Bachchan kept Abhi company as he waited outside to greet his guests. 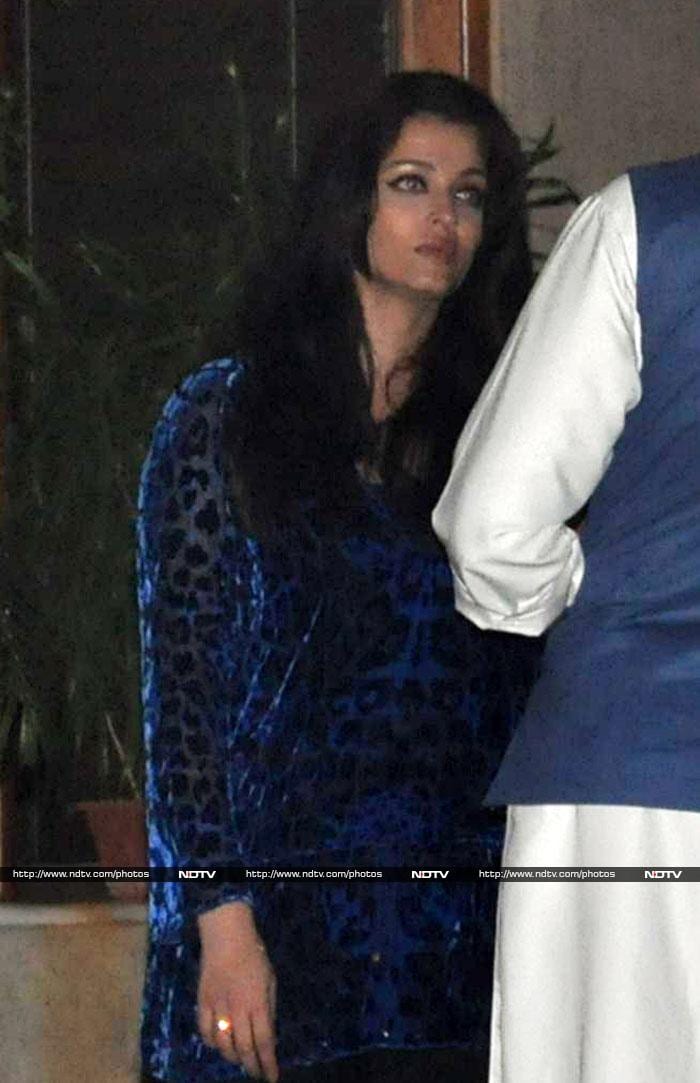 Aishwarya was, as usual, simple and beautiful in blue.

Shah Rukh Khan, a close friend of both Aishwarya and Abhishek and Abhishek's co-star in Happy New year, was spotted driving up. 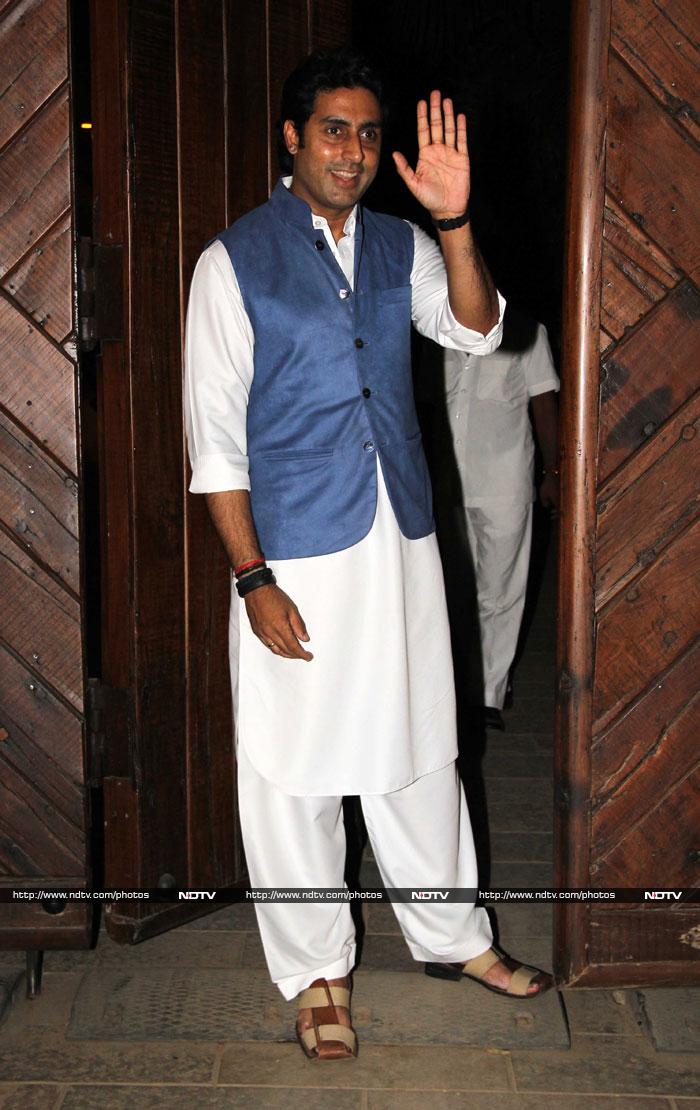 Abhishek was dressed in a simple white kurta pyjama with a blue jacket which matched Ash's outfit. 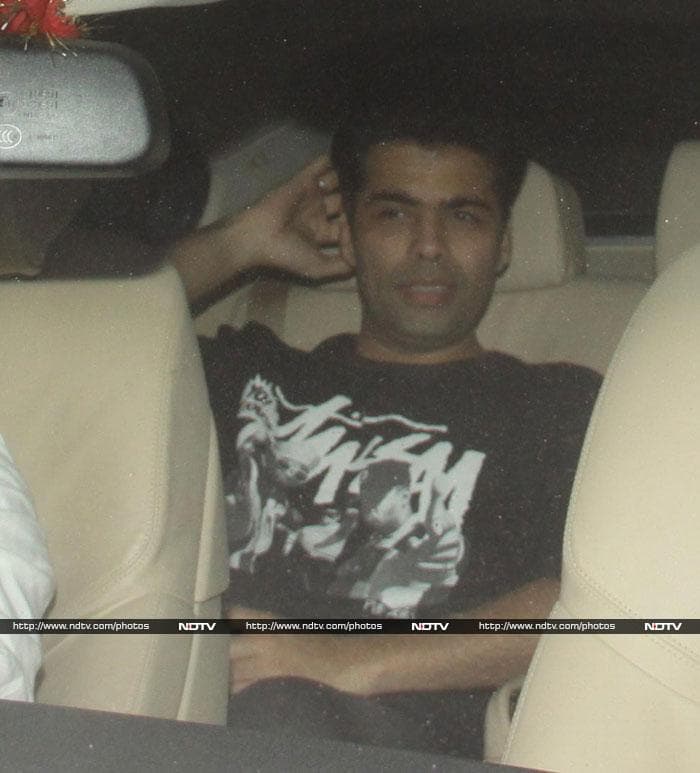 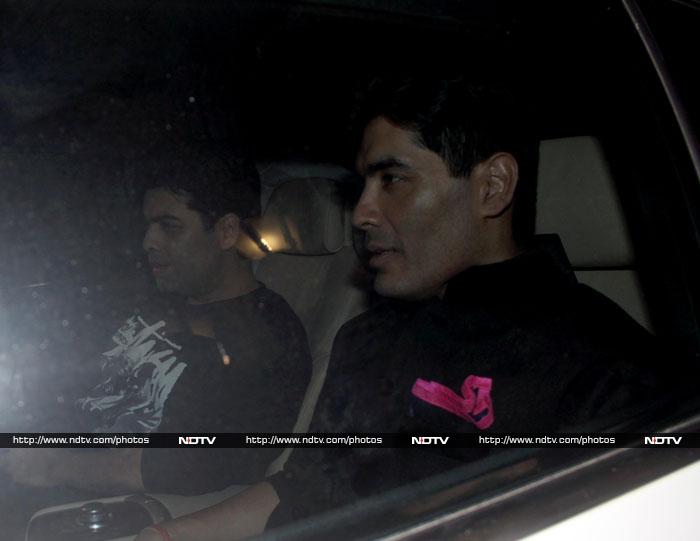 He arrived with designer Manish Malhotra. 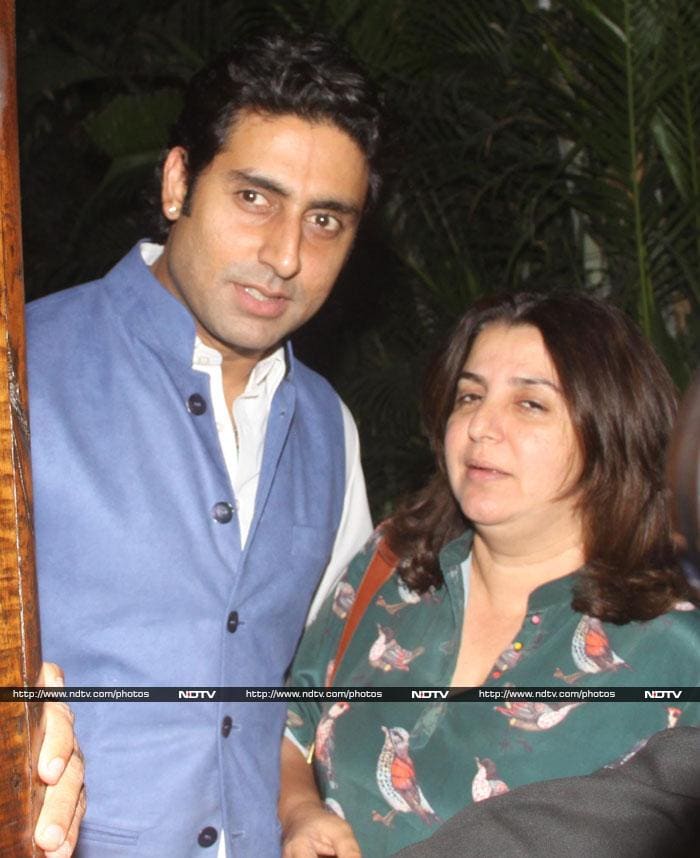 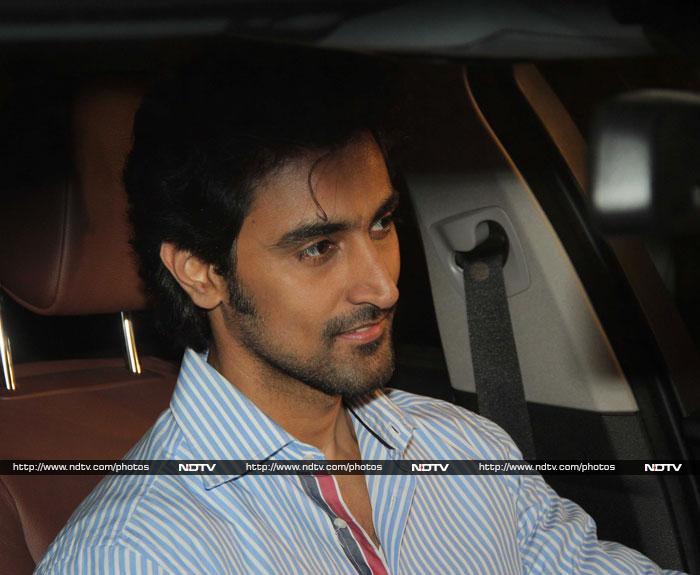 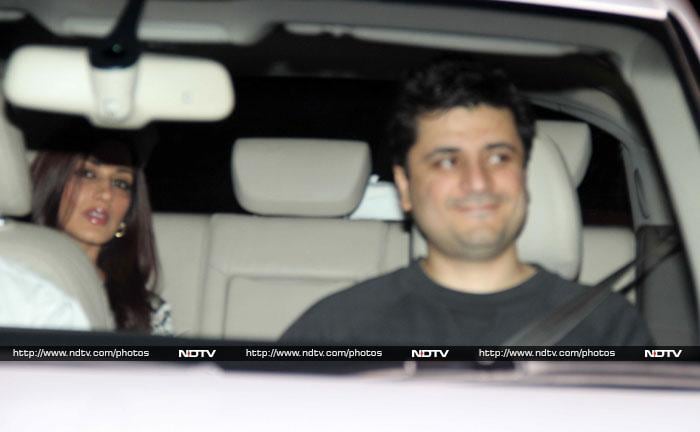