Won't Leave This Sofa, This Is A Comfortable Dharna, Says Arvind Kejriwal

"I am fighting for the people of Delhi against those who have stopped the public services. You can say this "dharna" (protest) is my surgical strike against those who want to punish the voters of Delhi," said Arvind Kejriwal, Delhi Chief Minister, on the phone to me for an exclusive interview for NDTV.

Kejriwal and his deputy, Manish Sisodia, as also senior ministers Satyendar Jain (who is also on an indefinite fast) and Gopal Rai have spent three nights sleeping at the waiting room of the Raj Niwas in Delhi. They say they won't leave till Lieutenant Governor Anil Baijal gives in to their demands.

Kejriwal's protest against Lt Governor Baijal, a first in India's democratic history, is likely to be a prolonged affair.

The Delhi government - which has seven ministers in all - says that Prime Minister Narendra Modi is using Lt Governor Baijal and bureaucrats to ensure that Kejriwal isn't able to function. It alleges that bureaucrats aren't showing up to work and remain on a sort of undeclared strike which began in February when a senior bureaucrat says he was assaulted by elected members of Kejriwal's party at a late-night meeting at the Chief Minister's home.

"We are not going to leave until the LG Saab instructs the IAS officials to start cooperating with my government again. For three months, they have refused to attend meetings called by us and refused to carry out any instructions. Have you heard of IAS officials in any part of the country striking work? I have begged the LG, please stop this vendetta against Delhi, but he is clearly working on orders from his boss. I was left with no choice but to do this and now I won't leave," said Kejriwal to me.

The waiting room is not large by any stretch of imagination and has no sleeping arrangements. The four politicians have now spent three nights sleeping on sofas but Kejriwal, a seasoned protestor, laughs and calls it "The most comfortable dharna I have been on. At least Baijal Saab is providing us water from the Raj Niwas. I and my colleagues are clearing our files from here. But I reiterate that we will not leave till this embargo they have put on the executive is lifted. I owe my Delhi this." 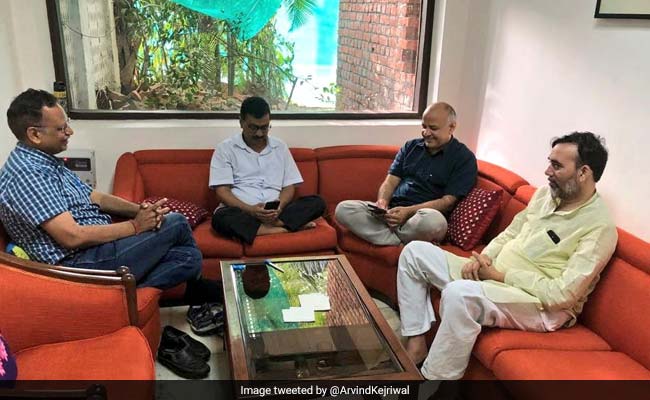 Kejriwal is a diabetic and his food and medicines are being delivered from his home to the waiting room. Meals for the other three ministers also arrive in tiffin boxes.

Those present on Monday evening when the dharna started say that Baijal refused to issue written instructions to IAS officials to ensure they are working with the government which is when Kejriwal plonked himself down on a sofa and said he would not budge till the issue was resolved. An angry Baijal, say sources, snapped, "You are putting a gun to my head". Kejriwal, back to his pre-political activist avatar, apparently smiled, folded his hands and said, "I am a poor man. I have no gun, only the support of my people. I will not leave here till you listen."

Kejriwal once again denied that Chief Secretary Anshu Prakash had been attacked by legislators from his party in February. Despite the police's investigation - which included his interrogation - Kejriwal says that no chargesheet has been filed, which supports his claim that the allegations of assault are untrue. "The Delhi police reports to him. Why did he file the FIR only the next evening? This is nothing but a pre-planed conspiracy to derail our work".

Kejriwal and the Modi government have had a very fraught relationship since AAP's over-sized victory in Delhi in 2015. Kejriwal's new mantra and end game of the current dispute is "full statehood for Delhi." His gambit to the BJP: deliver this and I will campaign for you to win the next election.

Currently it is a case of the immovable object. The dabbas from home keep him going.

(Swati Chaturvedi is an author and a journalist who has worked with The Indian Express, The Statesman and the Hindustan Times.)

Disclaimer: The opinions expressed within this article are the personal opinions of the author. The facts and opinions appearing in the article do not reflect the views of NDTV and NDTV does not assume any responsibility or liability for the same.
Comments
Arvind KejriwalLG Anil Baijal