Trudeau, Please Stay Out Of It. But At Home, Let's Fix The Problem

In the last session of parliament, bills ostensibly to help farmers were passed in both the houses, however, in the Rajya Sabha not much discussion time was allotted to the matter and the way it was bulldozed into an act was witnessed by the nation amongst protests from various parties. Democracy is about 3Ds - Debate, Discussion and Decision; however, the scenes from parliament on that day suggested intolerance on the part of the government to the first 2 Ds of democracy.

After these bills were passed, farmer protests broke out in various parts of the country, yet we saw a government unfazed in its attempt to do what it pleases. There were zero attempts to reach out to those farmer groups that were protesting, especially from Haryana and Punjab, the well-known food bowl states of our country which are also heavily dependent on agriculture as their main source of income and employment.

Agriculture, as many know, is a state subject; hence, state governments raised wide-ranging concerns and Punjab went so far as to pass a resolution in its assembly to not implement the legislation passed by the parliament. Maharashtra was amongst the first states to adopt the Model APMC Act of 2003 & Amended APMC Act further by deregulating fruits and vegetables and allowed farmers the choice to sell in open markets or to Agriculture Produce Market Committee (APMC). To say it changed the fortunes of farmers would be dishonest and incorrect; however, it gave farmers a choice. For 2019-20, the turnover of APMCs was 479% higher than the turnover of private markets and those holding private licenses to buy produce directly from farmers. That most farmers in the state continue to sell their produce through APMCs is vindication of the fact that often, what one perceives as major reforms doesn't necessarily turn beneficial for those whose livelihoods are dependent on it; example, demonetisation. At its most recent cabinet meeting, Maharashtra promised MSP + Rs 700 to procure farmer produce. Our focus is farmer empowerment and not reducing them to the mercy of industrialists who could exploit them further. There have to be institutional safeguards to ensure that. Thousands of farmers, braving water cannons, tear gas and barricades of the Haryana police, have reached the borders of Delhi

The way farmers across the country were stopped to enter Delhi where they were assembling to protest against the Act and speak to the government was shameful to say the least. The farmers were not just teargassed but also lathi-charged; water cannons were used, highways were dug up and blockades created to stop the farmers; several saw FIRs registered against them. Despite all this, they marched on. The country was outraged with this high-handedness, yet the government seemed nonchalant. 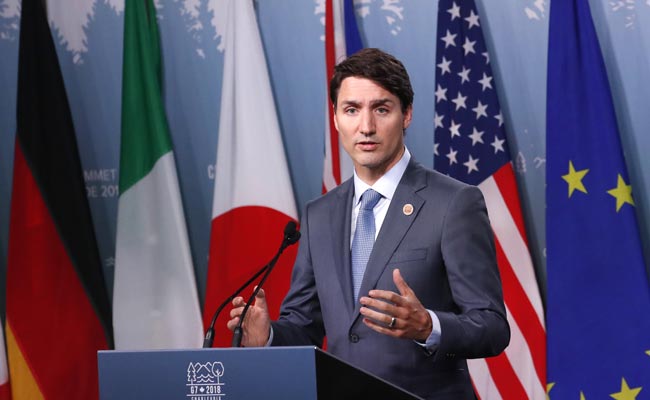 Needless to say, with all senior leaders in the government not paying heed to what farmers are protesting against and not even making an attempt to understand their grievances, the voices of outrage are increasingly getting vocal. Today, the Canadian Prime Minister touched upon the issue in his address to the Sikh community of Canada on the occasion of Gurpurab. While his concern for rightful protests is touching, using India's internal issue to further his own place in his nation's politics is unfortunate. Let us also not forget that Canada was a co-supporter of the US Agriculture Department statement in WTO in 2019 to claim "India's market price support for each of specifically five pulses far exceeded allowable levels of trade-distorting support". In international relations, there are courtesies extended to not comment on internal affairs of a nation, India has always extended it to other nations, we expect the same to be extended to India.

However, if the Prime Minister of India continues to ignore these protests, as I said in a tweet that went viral, he will be giving other nations a chance to speak on this as it concerns democratic, integrity and commitment. The Prime Minister should address these concerns as soon as possible; else, it will fester to a point of eruption, which the nation can do without.