Opinion: Tejashwi Yadav's Growth Spurt Takes Him Ahead Of BJP

In a week where the BJP scored the prized real estate of Maharashtra, it lost some ground in Bihar.

On June 29, Tejashwi Yadav, who heads the Rashtriya Janata Dal or RJD, arrived at the Bihar Assembly driving an SUV. His co-passengers were four of the five MLAs in Bihar from Asaduddin Owaisi's AIMIM. It wasn't an ordinary carpool. They said they were joining his party.

The poaching was shown off in true Bihar "Bahubali" (strong man) style. And with their addition, Tejashwi Yadav's party is now the single-largest in Bihar: it has 80 MLAs, three more than the BJP. Akhtarul Iman, the Floor leader of the AIMIM, now its lone MLA, was scathing at a press conference, using unparliamentary language to attack Tejashwi Yadav, claiming that the RJD cares not about Muslims but only votes, and had throttled the only party which was speaking of Muslim interests. Owaisi has faced the charge of being the BJP's "B-team" in many election battles by serving as a "vote katua" (vote cutter) and polarising elections which tends to help the BJP - the anti-BJP votes get scattered, while the Hindu vote consolidates around the BJP.

The background to Tejashwi Yadav's moves to grow his party and signal that he is unambiguously in charge is in the recent mini-revival in the party. In the last assembly elections, the RJD won 75 seats, and recently won an Assembly election in a three-cornered fight defeating the BJP & the Vikassheel Insaan Party.

Bihar's population consists of nearly 17 percent Muslims. Tejashwi Yadav has said he wants all secular parties in Bihar to become stronger and that his party, for decades headed by father Lalu Yadav, has played the major role in the fight against communalism. "It is because of us that the BJP has not mustered courage to contest an election in Bihar on its own," he said. Apart from virtue-signalling the RJD, the 32-year-old was also sending signals to Chief Minister Nitish Kumar, perhaps the most opaque and hard-to-read politician in India. Nitish Kumar has been Chief Minister seven times in 20 years, a record. Six of those terms including this current stretch were as part of an alliance with the BJP; one was with the Congress and Tejashwi Yadav and he ditched them mid-term to reunite with the BJP.

Nitish Kumar has never managed to reconcile to the fact that Narendra Modi, for whom he displayed a distaste as Chief Minister, is now the country's leading politician. Since Narendra Modi and Amit Shah become national leaders, Nitish Kumar's equation with the BJP has been complicated. Despite running the state together, the parties make their differences public, and with such regularity that it no longer leads to the speculation of whether their alliance will collapse. But recently, Nitish Kumar took it up a notch when he said that a caste census was a must after the Modi Government said it would not happen. The Chief Minister teamed up with Tejashwi Yadav in the Assembly to announce that Bihar would begin a caste-counting initiative. Tejashwi Yadav knows his "chacha's" weakness for praise and has been showering Nitish Kumar with it. 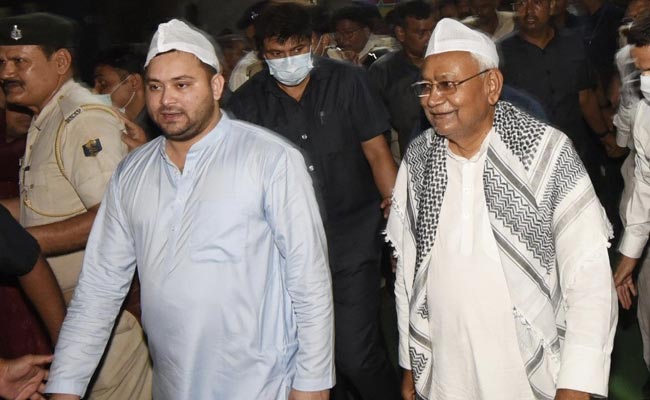 Nitish Kumar also seemed to scoff recently at top BJP leaders with loaded statements - for example, contradicting Amit Shah on rewriting Indian history books by saying "Nobody can change history". One of his biggest snubs to the BJP was his refusal to comment early or decisively on the cascading and violent protests that erupted in Bihar against the government's new army recruitment "Agnipath" scheme.

Nitish Kumar likes his allies to display public affection for him. While he was made much of by Atal Bihari Vajpayee's BJP, Amit Shah and Narendra Modi have been curt. The PM has publicly denied him a "special economic package" for Bihar.

The BJP made a shrewd pick in Draupadi Murmu, a tribal woman leader for President, making it impossible for most leaders including Nitish Kumar to veto the choice.

Nitish Kumar now has more in common on issues with Tejashwi Yadav's RJD than the BJP. But he has always chosen power over ideology and with his party's increased strength, Tejashwi Yadav may try to cash in on that.