I must confess to having felt queasy when I heard that our former Rashtrapati, Pranab Mukherjee, a man I much admire, was likely to accept an invitation from the RSS Sarsanghchalak, Mohan Bhagwat, to attend the convocation of Sangh Parivaar volunteers trained for three years in becoming pracharaks.

I was not queasy about what he would say for I had no doubt at all that as a life-long liberal secularist whose secularism does not clash with his deep religious beliefs as a pious, practicing Hindu, he would provide the budding pracharaks with a half-hour antidote to all they had been wrongly taught over the past three years. I was certain his dissertation would be in illuminating conformity with the spirit of the Vedas and the Upanishads, the Dhamma of Gautama, the Sufi traditions of Amir Khusrau, the Bhakti movement, and the teachings of the ten Gurus. I knew also was that he would carry forward the message of "unity in diversity" and sarva dharma sambhava of Swami Vivekananda, Gurudev Rabindranath Tagore, Mahatma Gandhi and Jawaharlal Nehru. On all these counts, the former President's speech was a model that deserves to be played back to every new RSS batch when they join, again mid-way through their course, and finally at the end. My apprehension is that nothing of the sort will happen.

My apprehensions are two-fold: one, that even the token presence at RSS headquarters of so distinguished a secular personality as Pranab-da would lend a tinge of respectability to an organization that has represented for nearly a hundred years, but more particularly over the last four years, the very anti-thesis of our millennial tradition of nation of many faiths, open, welcoming to new ideas and thoughts, absorbing, assimilating and synthesizing what comes our way, whatever its provenance and however associated in historical memory with assault, invasion and political turbulence; second, whether a half-hour convocation address can reverse the RSS teaching that our plurality is entirely owing to the sanatana dharma and, in consequence, the "othering" of Indian followers of other faiths, particularly Islam and evangelical Christianity (that has led to mayhem and even murder and massacre of the minorities).

Will the RSS ever subscribe to Gandhi-ji's brilliant summing up of the essence of India's civilization and contemporary nationhood when he proclaimed that he does not wish to see the windows of his house stuffed or his doors closed for he wants the winds of all the world to blow about his home - but refuses to be swept off his feet by any?

In the event, Pranab-da gave precisely the speech one expected of him. It was a convinced and convincing affirmation of our civilizational values and the need to build independent India's "Nation, Nationalism and Patriotism" in line with our assimilative, inclusive, and syncretic values and traditions; in a word, our "Constitutional patriotism", as he so strikingly put it. 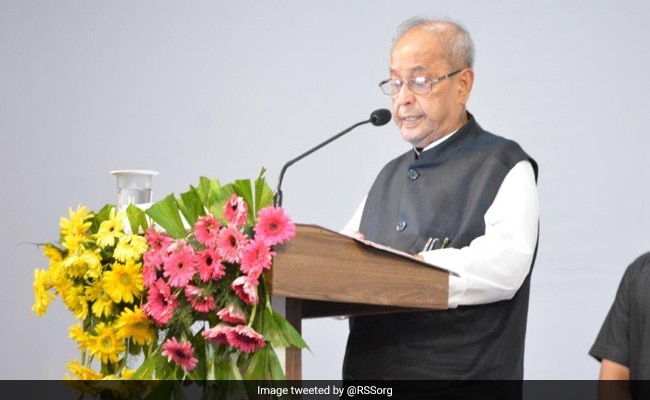 The RSS has little difficulty in subscribing to the concept of "unity in diversity". Where it diverges is in attributing this uniquely to Hinduism to the disparagement of the contribution that other faiths and cultures have made to the evolution of the uniquely Ganga-Yamuna ethos celebrated by Swami Vivekananda, Gurudev Rabindranath Tagore, Mahatma Gandhi, Jawaharlal Nehru, and, now, Pranab Mukherjee. While Pranab-da hinted at this, he did not take it on frontally. Therefore, unless we hear a radically altered voice emerging from Nagpur over the next few months, one will continue to wonder whether the RSS got away with increasing its prestige or whether Pranab-da persuaded them to rethink what they have been up to for nearly a hundred years since the RSS founder, KB Hedgewar was given permission by the British in 1925 to call on VD Savarkar, then under house arrest in Ratnagiri.

Savarkar was personally an atheist, but had thought up a political philosophy that he dubbed 'Hindutva', the essence of which was that only those who regarded India as both their 'pitrubhumi' (Fatherland) and their 'punyabhoomi' (Holy Land) could rightfully claim to belong to the Indian nation. This, by definition, meant that those who looked beyond the shores of India for their spiritual inspiration - the Muslims who turned towards Makkah (Mecca) to pray and the Christians who looked to the Vatican or other off-shore Western lands to seek spiritual succour - had to be excluded from India's nationhood or reduced to second-class citizenship. Inevitably, the inventor of 'Hindutva' preceded Jinnah in articulating the 'two-nation theory' in his Presidential Address to the Hindu Mahasabha in 1938 and went on record on August 15, 1943 to endorse Jinnah's assertion of Hindus and Muslims constituting separate 'nations'.

This negativity towards non-Hindu faiths and beliefs was seized upon to become the quintessence of the philosophy of the RSS. And after BS Moonje visited Mussolini's Italy and returned to India sold on the fascist model of political organization, the RSS under Golwalkar became the muscular vanguard (in khaki shorts if not black shirts) of promoting Hinduism in line with Savarkar's denunciation of non-violence, not only as advocated contemporaneously by Gandhi-ji but also for having been the basic reason since the Buddha's time for the "un-manning" of the Hindu race that, according to Savarkar, led to centuries of non-Hindu rule. Savarkar was particularly harsh on Emperor Ashok for having elevated non-violence to a principle of statecraft. All this, of course, led inexorably to an acolyte of Savarkar assassinating the Mahatma. The Kapoor Commission of Enquiry indicted Savarkar for being part of that conspiracy.

The vicious, divisive thoughts and philosophy of Savarkar and the RSS have been dressed up and taught to the graduating class for three years by the RSS. The former President's address has been a necessary corrective. To what extent the corrective has been successfully administered is difficult to assess. If it has worked, that would be miraculous. The miracle would lie in Mohan Bhagwat severely condemning, and getting the BJP Prime Minister to condemn and punish, those who resort to "ghar wapasi", "love jihad", "patriotism" as displayed at the JNU campus and the Patiala House courts, the patronizing of the Hindu Yuva Vahini, lynching, murder and vigilantism of the kind we have seen these last four dreadful years.

If nothing of the sort happens, we can certainly felicitate the former Rashtrapati for having done his best but regret that not even he has been able to make the leopard change its spots.