These viral videos, which show the monks doing everything from skipping ropes to skateboarding, have been 'liked' and 'retweeted' thousands of times 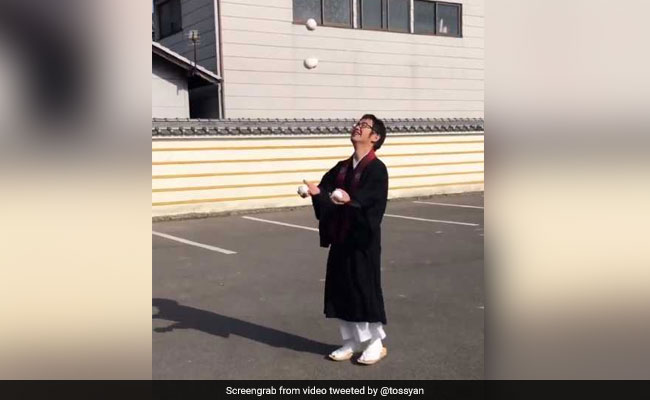 A Japanese monk shares a video which shows him juggling in robes.

Buddhist monks in Japan are out to prove a point, and they are doing it in the best way possible - by using social media as a weapon. Japanese monks are posting videos on Twitter which show them doing things like juggling and skipping while wearing their traditional robes after a monk was pulled over for driving in his robe.

According to BBC, a monk in the Fukui prefecture of Japan was ticketed for driving in a robe because the police officer felt his attire "could affect safe driving". The officer reportedly said that the "sleeves and length" of his robes would affect his driving.

Now, in a bid to show the world that they can move freely in their robes, monks are posting videos which show them doing agile acts, using a hashtag that translates to "I can do it in monk's robe". These viral videos, which show the monks doing everything from skipping ropes to skateboarding, have been 'liked' and 'retweeted' thousands of times, and have even been curated into their own Twitter Moment.

Take a look at some of the videos below:

According to local reports, the monk who was pulled over in Fukui has not been named, and he has refused to pay the fine

This Biker In Tamil Nadu Was Stopped By A Cop. Watch What Happened Next