A young leopard tries to take on a smart porcupine in this video from Katarniaghat. 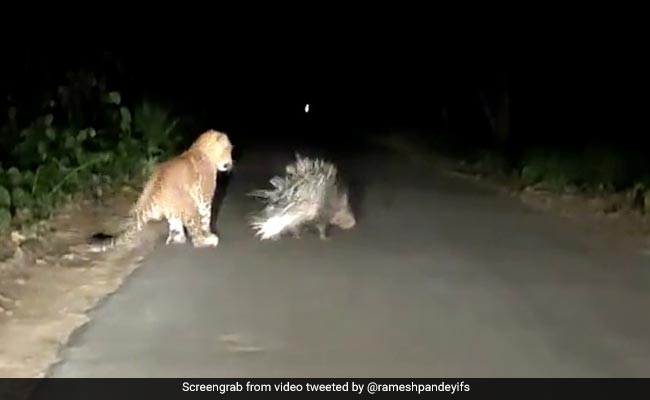 Watch what happened when a leopard and a porcupine crossed paths.

In the video, which was filmed at the Katarniaghat Wildlife Sanctuary, the two animals are seen on a deserted stretch of road after dark. The leopard moves towards the porcupine, which quickly spreads its spines to scare the predator away. Undeterred, the big cat crouches low and strikes as the porcupine approaches - unsuccessfully. The video shows the leopard quickly moving away from the porcupine, an animal famous for its impenetrable spines defence.

According to Earth Touch News Network, in most of the of recorded porcupine-vs-leopard altercations, it is the big cats that come on top as they have mastered the art of porcupine hunting and are able to get underneath the sharp spines.

In this case, the young leopard wasn't so successful. "It is not easy for a young leopard to take panga with a smart porcupine," wrote Mr Pandey while sharing the video on Twitter.

It is not easy for a young leopard to take panga with a smart porcupine. Very interesting video from Katerniaghat. #wildlifepic.twitter.com/xBide0za6d

The video has been viewed over 44,000 times since it was shared. It has also collected more than 3,600 'likes' and a ton of comments.

Right sir. Smart Leopard !!!
I learnt in one of my visit to Wildlife sanctuary that porcupine quills are designed to work themselves deeper and deeper into affected area of animal and can cause painful death.

Porcupine is very audacious as it is quite aware of his strengths.

Even full-grown tigers are scared of them. Good to leave them alone as a bad injury can turn a big cat into a cattle-killer or even a man-eater.