Watch What Happened When A Fisherman Accidentally Hooked A Crocodile

1.5 million views for this dramatic video. 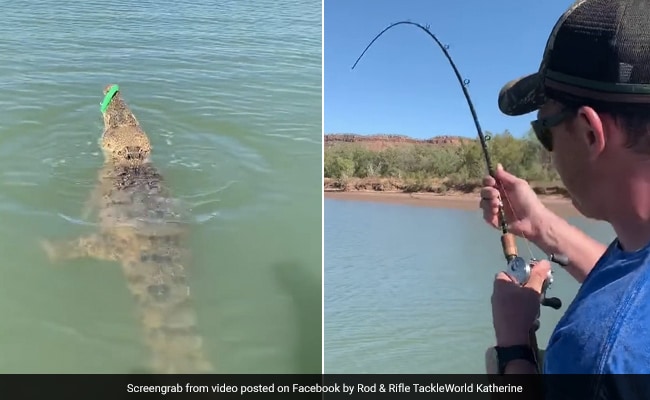 A fisherman in Australia accidentally hooked a crocodile.

This is probably not the kind of catch a fisherman would want. An angler in Australia accidentally hooked a crocodile while fishing in Northern Territory last Monday. Trent de With was with his family at a popular fishing spot near the town of Katherine when the incident occurred, reports Katherine Times.

Mr de With, who manages Rod & Rifle TackleWorld Katherine, shared an alarming video of the crocodile on his store's official Facebook page. In the video, he can be seen reeling in his lure - only to find a huge crocodile attached to it.

The viral video shows Mr de With struggling to get his lure back from the crocodile, who refuses to let go. The reptile can be seen leaping out of the water several times while holding onto the lure. "You can accidentally hook them, this one seemed like he actually tried to eat it," Mr de With told Daily Mail.

The dramatic video of the reptile pulling at the lure has gone viral, collecting over 1.5 million views on Facebook.

"That would have been a new rod for me," wrote one person in the comments section.

"The line not snapping is impressive," said another.

Incredibly enough, Mr de With did manage to get his lure back, although it "doesn't track as straight as it used to."

"You just fight it till the line breaks or the hooks let go. That rod and reel are good quality stuff - which makes all the difference specially when you hook a big barra you don't won't your gear to fail," he said.