The Stobart Air flight was forced to abort landing. 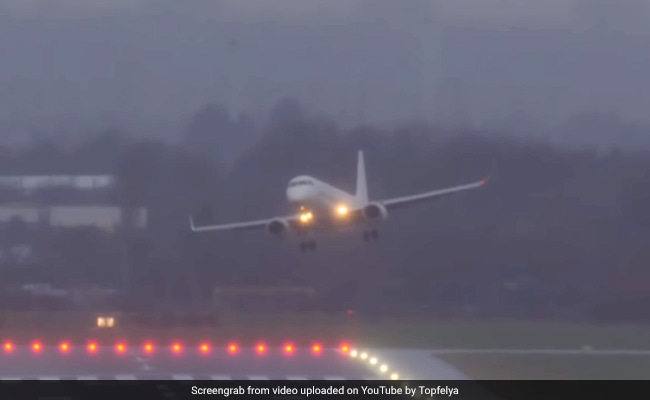 A plane was blown sideways by the heavy winds of Storm Ciara.

Hundreds of flights and trains were cancelled across northwest Europe earlier this week as Storm Ciara swept in. The storm, which has been dubbed the "Storm of the Century", brought with it torrential rainfall and heavy winds, flooding hundreds of homes and disrupting flights.

On Sunday, the pilot of a Stobart Air flight was forced to abort landing at the Birmingham Airport, which is already well known for its heavy crosswinds. Dramatic footage captured at the airport shows the Embraer aircraft being blown sideways by Storm Ciara. The plane was seen lurching left and right before it unsuccessfully attempted to touch down on the runway.

According to the Daily Mail, the Stobart Air flight was arriving from Belfast. The pilot was finally forced to abort the landing and take off again.

The heart-stopping video of the plane's landing has been viewed more than 3 lakh times on YouTube.

"Wow extremely impressive footage!" wrote one person in the comments section. "Amazing footage. You've done a great job recording this. But I am sure that it wasn't such a great experience for the passengers," said another.

BBC reports that after sweeping across Ireland and the UK, Storm Ciara battered the north coast of Europe. High winds caused major problems, including ripped off roofs, fallen trees, cancelled flights and at least one car accident.

Meanwhile, UK's Met Office has warned that a new storm could hit the country this weekend. Storm Dennis is expected to bring heavy rainfall and strong winds to parts of the UK.