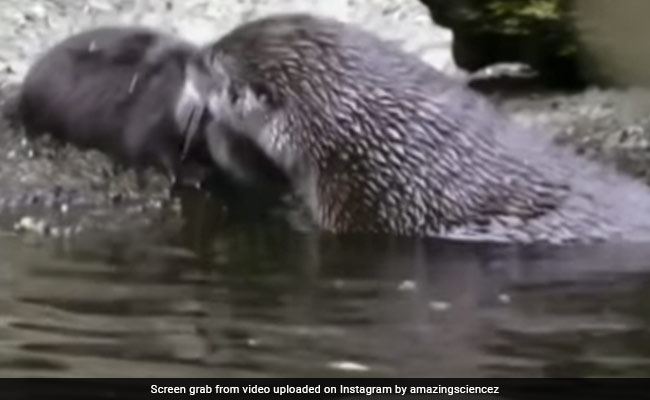 Picture shows mother and baby otter together going for a swim.

Shared by Amazing Sciencez on Instagram a day ago, the caption reads, "She'll grab the baby by the scruff of the neck and dunk him in the water. Baby otters are extremely buoyant, so it has built-in water wings for his swim lessons."

The text super on the video reads, "This is how mama otters teach their babies to swim."

The clip opens with a mother otter grabbing its baby from its scuff of the neck and pushing to come towards the water. After a moment, the mother otter goes inside the water first and then takes its baby under it too.

The mother and baby can be seen swimming under the water together. At first the mother otter teaches its baby grabbing its scuff from the neck but then leaves the baby into water by itself and it learns how to swim.

The video has been credited to the Oregon Zoo. It has amassed over 62,000 views and more than 5,000 likes in just one day.

Users have left heartfelt remarks in the comment section of the post. Some users praised the mother otter while others related the incident to themselves.

"Hey that looks just like my dad taught me," one user wrote.

Another said, "Weird, my mom taught me the same way."

"And here my butt is being thrown in a pool while being told to sink or swim," commented a third user.

Otters are carnivorous mammals belong to the Lutrinae subfamily. Fish and invertebrates make up the diets of the 13 extant otter species, which are all semiaquatic, aquatic, or marine. Weasels, badgers, mink, and wolverines are all members of the Mustelidae family, which also includes weasels, badgers and mink.

A second user simply said, "Those rolls on his hands."