Jazz the giraffe and Hunter the dog are inseparable. 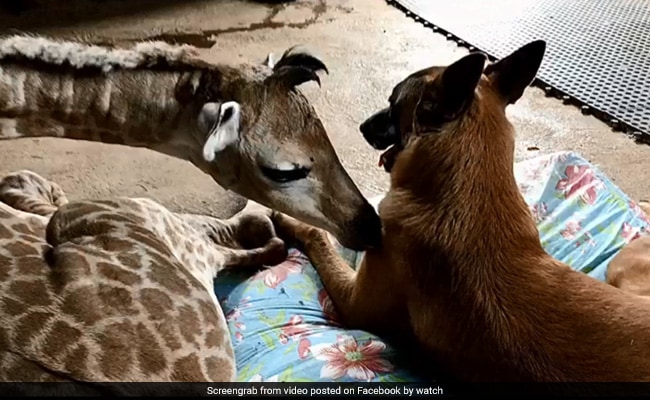 Jazz and Hunter have become friends at The Rhino Orphanage in South Africa.

It was at The Rhino Orphanage that Hunter, the centre's anti-poaching and security dog, fell "head over heels" for Jazz the baby giraffe. The story of their unusual friendship is now viral on the Internet.

"He stays in the room all day with Jazz and the carers and doesn't allow his brother Duke close," The Rhino Orphanage wrote in a Facebook post shared one week ago, posting adorable pictures of the giraffe and the dog together. "So concerned was Hunter about Jazz when he was in a coma that he did not want to eat."

They added that the baby giraffe is now doing better and Hunter has regained his appetite.

On Friday, The Rhino Orphanage also shared a heartwarming video of Hunter and Jazz playing together. "The bond and understanding between Jazz the giraffe and Hunter our AP Belgian Malinois is astonishing," they wrote.

The video has gone viral with over 2.6 lakh views and more than 1,000 adoring comments.

"Hunter and Jazz are so cute together, they love each other," wrote one person. "I could sit and watch this all day, what an amazing bond between these two animals," said another.

What do you think of this friendship? Let us know using the comments section.