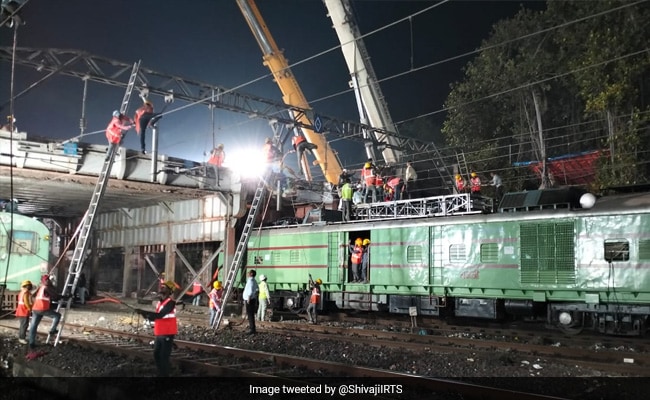 The bridge was deemed unsafe by a team from the Indian Institute of Technology Bombay.

A British-era bridge, located in Mumbai, has been dismantled by the Central Railway. It said in a statement that 27 hours were allotted for taking down the Carnac Bridge, but the work was completed before that on Monday. The Central Railway had announced a megablock to successfully dismantle the bridge located between the Chhatrapati Shivaji Maharaj Terminus and Masjid Bunder on the suburban line. The demolition work started at 11pm on November 19 and was completed by 2am on November 21.

Though major traffic on the 19th century bridge was stopped in 2014, an expert panel from the Indian Institute of Technology-Bombay ruled it unsafe in 2018.

Apprising the residents about the developments on social media, the Chief Public Relations Officer of Central Railways, Shivaji M Sutar, shared various videos and photos of the bridge's dismantling. He informed that four cranes were deployed to take away about 450 tonnes steel structure of the old bridge.

The videos show the process of removal of the steel girders with the help of multiple large-capacity cranes and other machinery.

"It was a huge and challenging task as traffic on all lines and CSMT station were completely shut," Anil Kumar Lahoti, General Manager of Central Railways, told news agency ANI.

Several internet users posted comments on the successful completion of work. "Sir, Railway is a busy network in India. But good management of Railway," tweeted one user.

Another one said, "Kudos to CR official and staff."

"What a solid ironwork. Will the new(?) one be as strong and long lasting?" remarked a third user.

A person also added, "Proud of the great team who toiled day and night through their hard work. Kudos to the team for their sincerity.  Hope the team who actually toiled were taken care by the Railway Officials as work was done in hard manner.  I salute you all."

"Why didn't they do this 2 years back when Lockdown was in full force. That was a golden opportunity for Mumbai Local to improve infra such as this," said another.