The female tourist can be seen climbing the Mayan Pyramid in Chichen Itza. Later, she is seen dancing on the sacred site. 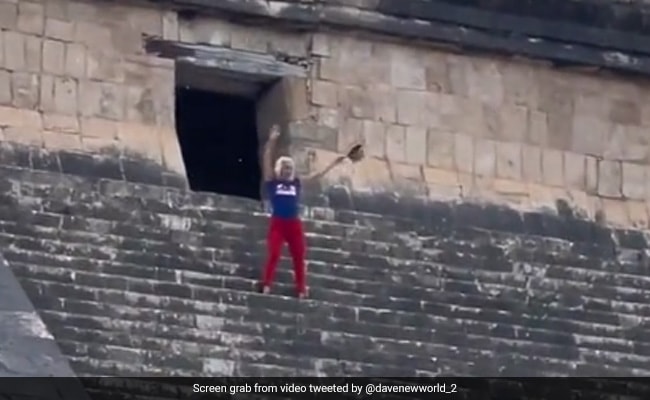 She was later brought down by a security official present at the site.

You may learn a lot about the world we live in and get a better understanding of other cultures by traveling to other countries. However, it is also extremely important to respect the culture and tradition of that particular nation. It can help increase your knowledge as well as increase your appreciation of them. However, in a bizarre incident, a tourist in Mexico was attacked by the locals in the country for illegally climbing a sacred site.

In a video shared by internet user Fifty Shades of Whey on Twitter, the female tourist can be seen climbing the Mayan Pyramid in Chichen Itza. Later, she is seen dancing on the sacred site. The clip also shows locals shouting slogans and protesting against her. She was later brought down by a security official present at the site. Once back on the ground, the tourist was carried to safety as locals demanded that she be imprisoned. The locals also threw water bottles on her as part of their protest.

The video has been captioned, "A disrespectful tourist climbs an ancient Mayan pyramid in Mexico and gets booed." Since being shared the video has been viewed 7.3 million times and has over 1.8 lakh likes.

A disrespectful tourist climbs an ancient Mayan pyramid in Mexico and gets booed pic.twitter.com/ZMAnwf0Euo

"You can see the fence she hopped over in the video.  Also, you may have noticed that she was the only one climbing - that should be a big hint that climbing isn't allowed," said one user.

A second user said, "The crowd yelling "jail, jail, jail!" makes me feel better about society seeing these acts as egregious rather than applaudable."

"And then she had to dance once at the top. Smh. There are human remains inside there. It's like dancing on top of a grave. The disrespect," said another user.

"Obviously she was wrong to jump the fence and disrespect the monument, but it's also kind of terrifying how quickly mobs can form. It looked some people were physically trying to get at her. This is a phenomenon of group behavior that shouldn't be treated lightly," commented another user.