According to the man who filmed the video, the driver was "completely asleep" 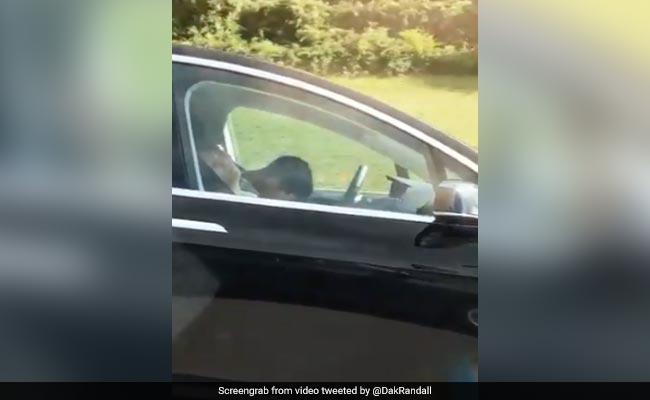 A Massachusetts man filmed a video of a driver asleep behind the wheel of a Tesla.

A Massachusetts man has filmed a video that shows a man asleep behind the wheel of a Tesla car as it speeds along a highway. Dakota Randall told NBC News that he was driving on Interstate 90 when he noticed a Tesla with its driver and passenger both asleep on Sunday afternoon.

"I kind of looked over and saw what I thought was somebody asleep at the wheel and I was like that can't be right, so I did a double take, looked over and sure enough this guy was just, head between his legs completely asleep," Mr Randall told NBC News.

He added that the car was travelling at 90-95km/hr. He tried honking to wake up the driver, but said that it "didn't work at all."

According to Mr Randall, he was beside the Tesla for about 45 seconds to a minute, during which time he managed to make a video of the sleeping driver. He sped up after that, leaving the slumbering man and his co-passenger behind.

Mr Randall later shared the video on Twitter, where it has been viewed over 6 lakh times and has collected a number of shocked comments.

"I'm never going to look at one the same," he said, referring to self-driving cars. "I'm always going to look to see if somebody's asleep."

According to The Guardian, state police said they are aware of the video.