Video: Chimpanzee Washes Clothes After Watching Zookeeper Do It

Yuhui, an 18-year-old male chimpanzee, was filmed washing a white T-shirt with a brush and a bar of soap. 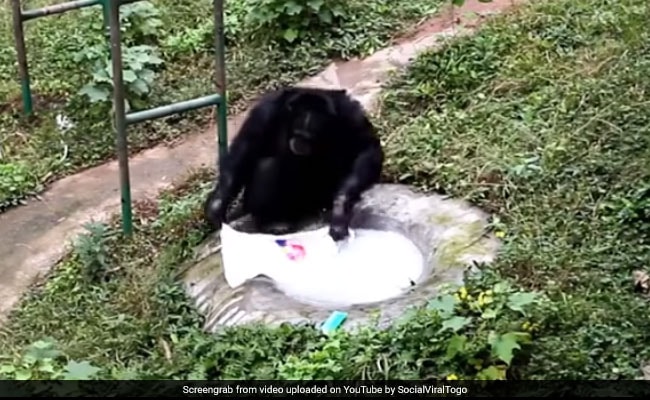 Yuhui was spotted washing a T-shirt in his enclosure.

A chimpanzee at a zoo in China left his keeper surprised after he was spotted washing clothes in his enclosure. Yuhui, an 18-year-old male chimpanzee, was filmed washing a white T-shirt with a brush and a bar of soap. The chimp was spotted doing laundry last Friday at the Lehe Ledu Theme Park in Chongqing, south-western China.

Yuhui's keeper, surnamed Xu, told news website ECNS that the chimp would watch her as she scrubbed her clothes in the basin. Ms Xu therefore decided to leave a T-shirt, soap and brush in his enclosure to see what he do.

"I never intended to teach him, but he watched me nonstop so I wondered if he would do it on his own," she said.

Video footage has that been widely shared online shows Yuhui soaping up his brush and washing the T-shirt. The chimp is seen wringing and rinsing the T-shirt in the video.

The video has delighted many on the Internet, collecting millions of views on Chinese social media platforms like Wevideo and Weibo.

Yuhui has a curious nature and is very good at mimicking actions, a spokesperson for the zoo told Daily Mail.

Chimpanzees are one of the most intelligent animal species in the world. According to American Museum of Natural History, humans and chimps share a surprising 98.8 percent of their DNA.