The five-foot crocodile was found inside a bathroom in Sitarganj. 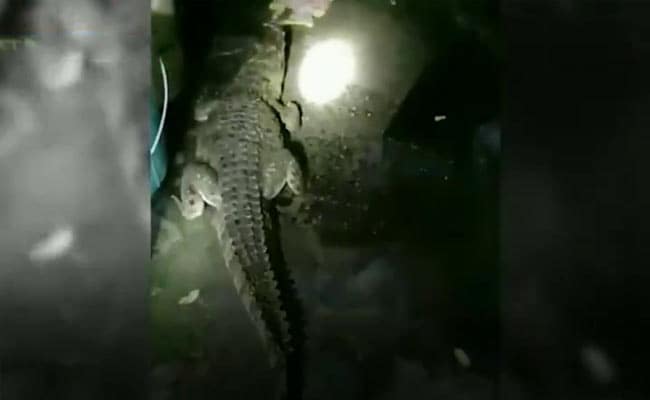 A five-foot crocodile was found inside a home in Uttarakhand's Sitarganj.

A five-foot crocodile recently managed to make its way to a residential area in the state of Uttarakhand, where it entered a house and left residents shocked. A video that is being widely viewed on social media shows the huge reptile inside a bathroom in the city of Sitarganj, where its presence led to panicked reactions from onlookers.

The reptile was reportedly found inside the bathroom of a house situated on Sidcul Bypass Road in Sitarganj on Saturday night.

The family which discovered the crocodile inside their bathroom panicked and began shouting on seeing it, which attracted neighbours to their place. A crowd soon gathered at the spot and tried to drive the reptile away, but their efforts proved to be in vain and the unwelcome guest refused to budge.

A video filmed at the scene shows the crocodile resting calmly next to two buckets of water inside the bathroom. Watch the video below:

#NDTVBeeps | A family in Uttarakhand's Sitarganj was shocked to find a 5-foot long crocodile in their house. pic.twitter.com/wubkWuKpzt

The presence of the crocodile was attributed to heavy rainfall during the monsoon season, which often leads to overflowing rivers and nullahs.

Last year, a viral video captured the moment a crocodile sneaked up on a stray dog on a flooded street in Gujarat after heavy rainfall.