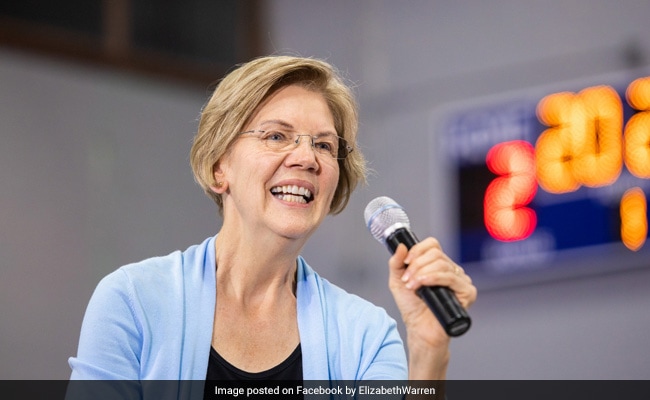 Democratic presidential hopeful Elizabeth Warren was recently asked what her favourite Indian dish is. Her response only raised more questions.

Elizabeth Warren, 70, appeared on Vice News' 'Brown & Black Democratic Presidential Forum'. During a segment of the forum titled 'The Short Answer', the US Senator was asked to name her favourite Indian food. Her answer left everyone - including the forum hosts - confused.

"Oh... It's like big tapioca. Do you know this stuff I'm talking about? And you serve it with daal and it's so good," said Ms Warren.

"I think you made that up," responded one host, laughing. "I'm not sure if I know it."

You can watch the interaction here.

Tapioca is a starchy product extracted from cassava root. It is also called sago or sabudana.

Elizabeth Warren's "big tapioca" served with "daal" also left many social media users scratching their heads, and led to much hilarity on Twitter.

.@ewarren is asked about her favorite Indian food at @vicenews' #BrownandBlack forum:

"It's like big tapioca. And you serve it with daal!" she says.

If you know what she's referring to, feel free to chime in.

Some tried guessing the Indian dish she was referring to.

It's boondi raita. It's not kheer. How is every Indian getting this wrong?

I assume she's thinking of this, or something like it. https://t.co/5Zbv24Xp9N

Almost positive she means papadam b/c it looks kinda like Indian tapioca chips, but bigger.

Me sitting on the bus to work trying to figure out what Liz Warren meant by tapioca pic.twitter.com/vN80XvVs9p

Showed my wife, who is Punjabi, and she just stared at it for a solid ten seconds. Just responds with "What?" pic.twitter.com/QiQvGisE7K

I knew Warren was in the pocket of Big Tapioca.

Elizabeth Warren's response to the question, in fact, also led to a "serious disagreement" with US Senator Bernie Sanders, who was also part of the forum. On Tuesday, host Krishna Sai Andavolu tweeted a video of an interaction that took place backstage, where Mr Sanders can be heard telling Ms Warren "We have a serious disagreement... on Indian food."

Bernie to warren: “we have a serious disagreement... on Indian food” backstage at #BrownandBlack forum @vicenewspic.twitter.com/MpRGq5fbij

In October, Elizabeth Warren received loud applause at CNN's LGBTQ Town Hall when she joked about a potential faith-based argument against same-sex marriages.