The video was shared by Dr Rajiv Kumar Gupta, Additional Chief Secretary of Forest and Environment Department, Gujarat, who later deleted it. 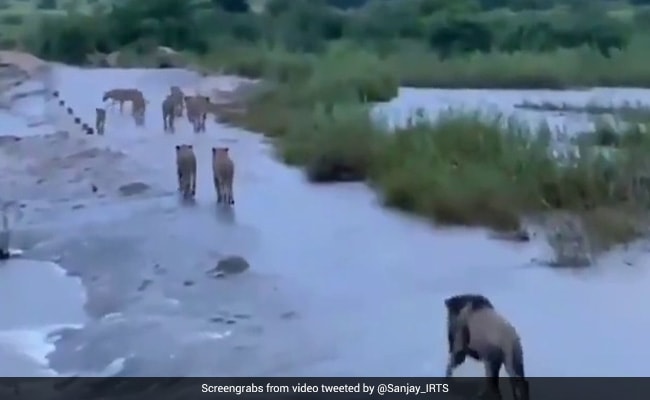 A video claiming to show the lions of Gir is doing the rounds of social media.

As Cyclone Tauktae pummelled parts of Gujarat and left behind a trail of destruction this week, a video claiming to show Asiatic lions in the state's Gir forest began doing the rounds of social media. The video was widely circulated on social media, garnering thousands of views. It shows a pride of lions walking through a wet area.

Among those who shared the video on Twitter yesterday was Dr Rajiv Kumar Gupta, Additional Chief Secretary of Forest and Environment Department, Gujarat, who wrote that the clip showed that lions were "completely safe in Gir landscape" in the aftermath of the cyclone. Dr Gupta deleted the video -- and replaced it with a clarification this morning -- after it emerged that the clip was actually filmed in South Africa's Mala Mala Game Reserve.

Although Dr Gupta has clarified that the video is not from Gujarat, it is still doing the rounds of social media with misleading captions. Take a look at the video below:

The original clip was filmed at the Mala Mala Game Reserve in South Africa. The reserve had shared the footage on Instagram back in February.

"The clip in question was sent by me as it was forwarded to me by an eminent wildlife enthusiast. Prima facie in the clip it appeared from Gir landscape," said Dr Gupta in a statement this morning.

"It is regretted that a wrong video was posted along with statement of lion safety in Gir," he said.

It is regretted that a wrong video was posted along with statement of Lion safety in Gir landscape.PCCF(Wild Life)Sh Shyamal Tikadar has apologised for his lapse & indiscretion.Inconvenience &confusion caused is sincerely regretted with an assurance for double caution in future. pic.twitter.com/ibs6n31LCU

Rajya Sabha lawmaker Parimal Nathwani, who also shared and deleted the video, tweeted a clarification. "Regret any confusion and inconvenience caused by quoting the wrong location & time of the video of the lion pride," he wrote.

Regret any confusion and inconvenience caused by quoting the wrong location & time of the video of the lion pride. It was put as forwarded and is now deleted.

This is not the first time that an older video has been circulated online as footage of Cyclone Tauktae's aftermath. A video of a slab of concrete falling on parked cars was widely circulated on social media as surveillance footage from Mumbai's Trident Hotel - but it was actually filmed in Saudi Arabia.