The pic was clicked by wildlife and nature photographer Vinod Goel. 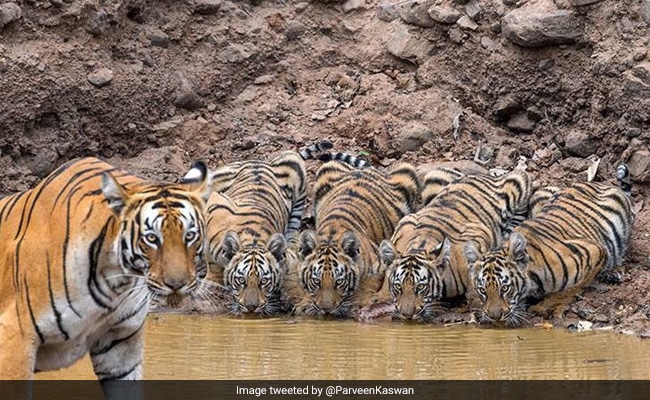 Four tiger cubs drink water while their mother watches on.

Clicked on this day exactly five years ago, a majestic photograph of a family of tigers has resurfaced on the Internet, thanks of Indian Forest Services officer Parveen Kaswan. Mr Kaswan often shares photos and videos of Indian wildlife with informative comments on social media. This afternoon, he took to Twitter to share the photograph which shows four tiger cubs drinking water as their mother keeps watch.

The pic was clicked by wildlife and nature photographer Vinod Goel at the Tadoba Andhari Tiger Reserve in Maharashtra, which is the state's oldest and largest national park. He had shared it on Facebook in 2018, writing that the cubs had been three to four months old when the photo was taken on February 28, 2015.

Shared this afternoon on Twitter by Mr Kaswan, the shot is being widely praised. "The #family which drinks together, stays together. True for #tigers also," he wrote while posting the image on the microblogging platform. He added that pictures like these increased confidence in conservation efforts.

The #family which drinks together, stays together. True for #tigers also. While #Mother is on a watch. And pictures like this increase our confidence in #conservation efforts. Picture by Vinod Goel from Western #India. pic.twitter.com/h3Mu6CVMBP

The pic has collected over 400 'likes' and several comments within minutes of being shared.

The Tadoba Andhari Tiger Reserve is one of the 50 tiger reserves in India which are governed by Project Tiger. The aim of the project, launched in April 1973, is to protect the habitat of the country's Bengal tigers and prevent their extinction.