This is how Europeans looked 7,000 years ago 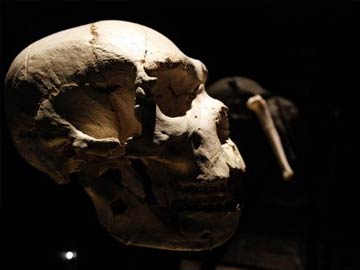 View of a skull of an adult Homo heidelbergensis, found in Sima de los Huesos, near Burgos.

Paris: The DNA of a hunter-gatherer who lived in Spain some 7,000 years ago suggests that Europeans were dark-skinned until much more recently than previously thought, researchers said Sunday.

Genetic material recovered from a tooth of La Brana 1, an ancient man whose skeleton was dug up in a deep cave system in Spain in 2006, revealed a strange combination of dark skin and blue eyes, according to a study in the journal Nature.

Europeans from the Mesolithic Period between 10,000 and 5,000 years ago, when La Brana lived, were thought to have already been fair-skinned due to low ultraviolet radiation levels at these high latitudes.

"Until now, it was assumed that light skin colour evolved quite early in Europe, (during) the Upper Palaeolithic... But this is clearly not the case," study co-author Carles Lalueza-Fox from Spain's Evolutionary Biology Institute, told AFP.

"This individual had the African variants for the pigmentation genes."

Lalueza-Fox said light-skinned Europeans emerged "much later" than once believed -- possibly only in the Neolithic era when erstwhile hunter-gatherers became farmers.

The cause, he said, may have been a change in diet and lower vitamin D intake associated with this lifestyle change.

In the absence of natural vitamin D, the human skin can produce its own in contact with the Sun - but dark skins synthesise much less than fair ones - creating an evolutionary incentive for change.

In La Brana 1, Lalueza-Fox and his team also found the genetic signature for blue eyes and dark hair.

While the exact hue of skin cannot be determined, the scientists say its combination with blue eyes was not to be found in modern Europeans today.

It is widely accepted that Man's oldest common forefather was dark skinned, and that people became more pale as they moved further north out of Africa into colder climates with less sunlight.

Subsequent migrations and mixing created the wide range of hues we have today.

La Brana's genome is the first of a European hunter-gatherer to be fully sequenced.

When compared to today's humans, it was found to be most closely genetically related to northern Europeans like the Swedes or Fins.

The probe also found that La Brana 1 had not yet acquired the genetic mutation that allowed later humans to digest milk and starch more easily -- an adaptation that probably coincided with the birth of agriculture in the Neolithic age.

Promoted
Listen to the latest songs, only on JioSaavn.com
The authors said more Mesolithic genomes will have to be analysed to determine how widespread La Brana's genomic traits really were.