They Thought It Was A Shark Or Dolphin In Water. It Turned Out To Be...

"My son was just about to jump in the water when I spotted the black fin from about 20 metres away," said Sililo Martens. 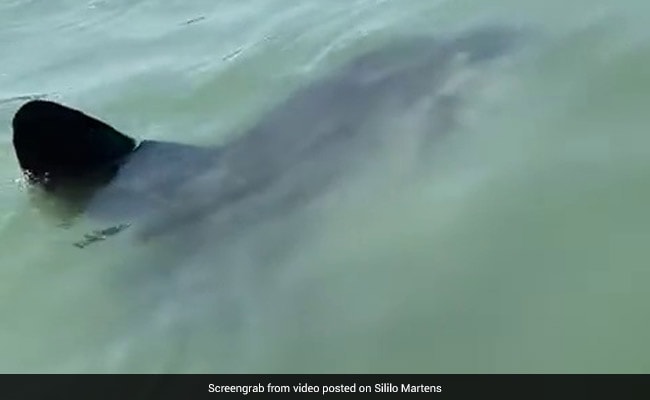 A fishing group encountered a strange sea creature off the coast of Wales.

The video begins with a fin protruding out of water - a sight that would make anyone think of a shark. But it wasn't a shark that this fishing group encountered off the coast of Wales, it was something else entirely. A video that is viral on Facebook shows the moment that a group on a boat came across a sea creature that left them puzzled.

The video was shared on the social media platform by Sililo Martens, who recorded the encounter on his phone. According to Metro News, Mr Martens was on his way back from a fishing trip off the coast of Mumbles when he and his group - consisting of his two sons, his friend Ollie and his son - when they came across the creature that initially made them think of a shark of a dolphin.

But as they got closer, the group realised it was not a shark or a dolphin, or even a blowfish. "No it's not, look how big that is, that's a huge fish," one person can be heard saying in the video. Watch the video and see if you can figure out the creature they encountered:

Since being shared on Facebook on Thursday, the video has collected over 88,000 views and hundreds of comments.

According to Mr Martens, they creature in the video is actually a sunfish - one of the heaviest known bony fishes in the world. "Seeing one just outside Mumbles (Wales) is pretty cool," he wrote.

"My son was just about to jump in the water when I spotted the black fin from about 20 metres away," he said, according to Wales Online.

"Straight away it looked like a shark fin and when we got closer it looked more like a dolphin and then, only until we got right up next to it, we could see it was this beautiful enormous fish," he said.

Also known as mola mola, sunfish are harmless to humans and often swim up to divers, thanks to their curious nature. Adults of the species can grow up to 14 feet and can weigh as much as 1,000 kgs.