The 'Rainbow Grandpa' Saving a Taiwan Village With Art 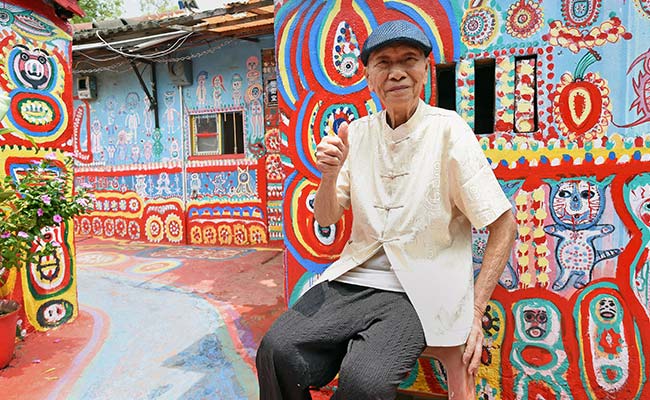 This photo taken on August 19, 2015 shows 93-year-old artist Huang Yung-fu posing for a photo next to his artwork in the Rainbow Village in the Nantun district of Taiwan's central Taichung. (AFP PHOTO / Sam Yeh)

Taichung, Taiwan: Huang Yung-fu greets visitors to his village in central Taiwan with paint-stained hands and shoes spattered with flecks of colour, a sign of the daily artistic labour that has seen him single-handedly stave off the developers' bulldozers.

At 93 years old, the former soldier still gets up at 3am every day to spend four hours daubing the walls of the small settlement with colourful figures, from birds and animals to celebrity singers and sportsmen.

Known as 'Rainbow Grandpa', Huang's artwork has kept the village safe as the surrounding area has been flattened.

He walks with a slight limp and rolls up his trouser leg to reveal a bandaged knee -- bruised from spending too much time kneeling on the ground to paint, he says.

But Huang is determined to continue adding to the vibrant murals that decorate the walls and pathways of the military dependents' village as a way to ensure its survival.

"We had a letter five years ago saying the government wanted to knock it down to build something new. They said we could take some money or move to a different house," said Huang, dapper in a navy flat cap and gold Chinese-style high-collared shirt.

"But I didn't want to move. This is the only real home I've ever known in Taiwan."

The settlement in the Nantun district of Taichung City once comprised 1,200 homes for veterans and their families.

But as the decades-old accommodation became run-down, developers snapped up the land and residents were offered Tw$2 million ($61,000) compensation or new housing.

Huang has lived there for 37 years, staying even after his neighbours abandoned their homes and only 11 houses remained.

That's when he decided to paint.

"I was the only person left in the village and I was bored," he said.

"My father taught me how to paint when I was five years old, but I hadn't done it since I was a child.

"The first thing I painted was a bird inside my house."

Huang decorated the interior of his two-bedroom bungalow, then the outer walls and the neighbouring homes which were standing empty.

The ever-expanding artwork became a parade of dogs, cats, planes and his favourite celebrities, including kung fu legend Bruce Lee.

When local university students discovered Huang's work they launched a campaign to save the village and four years ago the authorities agreed it should be preserved.

Now it is one of the area's leading tourist attractions, pulling in more than a million visitors annually, mostly from Asia.

"The government has promised me they will keep this house and this village," said Huang.

"I was so happy and thankful."

Officials say they are seeking to make the "Rainbow Village" a designated cultural area.

"Tourism is one of the reasons to keep it, but the main reason is that veterans' villages are very special to Taiwan," says Huang Ming-heng, chief secretary of Taichung's cultural affairs bureau.

"Unfortunately most of them have been knocked down, so it's important to keep this historical memory."

On a scorching Tuesday morning, tourists of all ages take selfies in front of the murals.

"I think they are amazing graphics -- this place should be preserved," said Hsiao Chi, 19, a student from Taipei.

"The colour and the drawings are very special," added Ivy Ng, 30, from Hong Kong, who was visiting Taichung with her family.

Originally from Hong Kong, Huang joined the nationalist Kuomintang (KMT) army in 1946 to fight communist troops in mainland China during the civil war there.

When the KMT was defeated in 1949, many troops followed its leader, Chiang Kai-shek, as he fled to Taiwan.

They were given temporary housing in hundreds of dedicated military villages across the island, a stop-gap while the nationalists regrouped.

But as the communists tightened their grip on the mainland, these temporary homes became permanent.

The Ministry of National Defence says many of the villages have been knocked down because residents wanted better living conditions.

But some bemoan the loss of the old communities.

"When they move out, people feel isolated," said Kang Han-ming, a former marine who manages the thriving Rainbow Village business and campaigns to protect the remaining settlements.

"They feel they have no roots. That's why a lot of older veterans who move to new buildings get sick."

The defence ministry has now pledged to preserve the last 13 villages as cultural areas.

Artist Huang says he never tires of the early morning regime that served to save his home -- a bungalow crammed with paints, marker pens and memorabilia.

The Rainbow Grandpa sits back on a chair in the shade and watches the crowds.

"I like speaking with them and they tell me the paintings are beautiful. I'll never get lonely with all these visitors."