The Controversy Over "Wasabi" The Pekingese Winning Westminster Dog Show 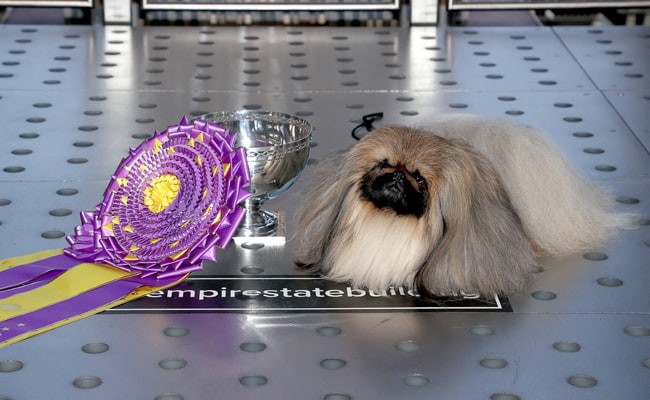 The Westminster Dog Show crowned a Pekingese named Wasabi its "Best in Show" Sunday, but not everyone was happy about the win. Three-year-old Wasabi was crowned best in show from a pack of seven group winners which also included Mathew, a French bulldog; Connor, an Old English sheepdog; and Striker, a Samoyed.

Bourbon the whippet came in second.

Speaking a day earlier when Wasabi won the toy group, his owner and handler David Fitzpatrick -- who also won "Best in Show" in 2012 -- lauded his pooch's "charisma, movement and showmanship."

"He's in his prime and he just looks wonderful," he added. Opinion differed on Twitter, where some raised concerns about the harmful breeding practices of Pekingese dogs and the risks they entail.

One Twitter user pointed out that Wasabi had to be kept on a cooling pad to stop him from overheating inside an air-conditioned room.

Wasabi wins the Westminster Dog Show in the US - sitting on a cooling pack to stop him overheating (in the air-conditioned arena...). Second pic, what a champ Peke looks like on the inside. The terrible price these poor dogs pay for human vanity. pic.twitter.com/NQrBZLkOwk

Others said that Pekingese dogs often suffer from breathing issues.

For real though as cute as Wasabi is, Pekingese dogs have horrific breathing problems and overheat really badly and we should pay some cosmic punishment for having done that to them. I'm worried Wasabi will increase the demand for those concave little things.

"How can a dog bred to the point where it can hardly breath win best in show?" another questioned.

CNN anchor John Berman noted that it is the fifth time a "rarefied," "inbred" Pekingese had won.

What have we become?

"Depressing to see this dog win New York's Westminster dog show. Pekingese are bred with flat faces that cause breathing problems," another said.

Depressing to see this dog win New York's Westminster dog show. Pekingese are bred with flat faces that cause breathing problems. Time to stop encouraging people to breed them! And to stop writing news stories celebrating their breeding! @AndrewDasNYThttps://t.co/wcGIF7QcTHpic.twitter.com/exDGLj1dgM

Several Twitter users also had issue with the dog's name.

I don't know who needs to hear this but the Pekingese is a Chinese breed of dog.

Much like the one that won the dog show tonite named “Wasabi,” which is of course a Japanese name. pic.twitter.com/aMTinRv2yF

Wasabi is an inappropriate name for a Pekingese dog. That's a Chinese breed. They should have named him Hoisin.

But Wasabi also received much love on social media.

Haters. Wasabi is precious and beautiful. I can't believe how mean people can be ????

no you don't understand I'm obsessed with wasabi, winner of the westminster dog show pic.twitter.com/BRJZxO4XtW

According to People's Dispensary for Sick Animals, a UK-based charity organisation, Pekes are considered a 'Brachycephalic' breed as they have been bred to have very short noses. Because of this, they often have trouble breathing, especially when they get too hot.