According to an English translation of Cass Beer's YouTube video descriptor, it is looking for these "real heroes" who came out and cleaned the road. 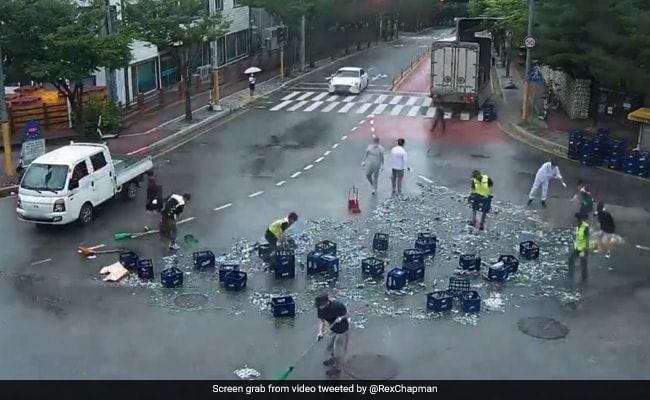 A Cass Beer truck took a sharp turn which threw several crates on the road.

A beer company in South Korea is winning hearts online by thanking people who helped clean the liquor spill from road after a mishap with its truck. The incident took place on June 29 in Chuncheon and the Good Samaritans immediately started cleaning the road. The video of the incident was recorded on a CCTV installed in the area and has gone viral on social media now. The gesture of the group of people is being widely appreciated by Twitter users after watching the clip.

The video was originally posted by Cass Beer company on its YouTube channel with the caption in Korean. It later surfaced on Twitter and other social media platforms where users posted an English version of the caption.

A truck spilled 2,000 bottles of beer on the road.

CCTV footage showed people approaching the driver one by one to help clean up.

The beer company (CASS) is now trying to find the heroes who helped out. Team game… pic.twitter.com/FQySL35y1z

According to social media posts, the truck was carrying 2,000 bottles of beer. When it took a sharp turn on the road, the crates started falling off from the luggage-carrying area which was already open. The steel bars installed in the container were unable to stop the beer crates from falling out.

The video going viral on social media shows the truck driver immediately stopping the vehicle after learning that the liquor has spilled on the road. Looking at the condition of the road, one man starts cleaning the beer and is soon joined by several others carrying mops.

The men are also seen removing the crates while working to clean the road. The users on social media said that the entire stretch was clean within 30 minutes. On Twitter, the video of the act has been viewed 2.4 million times.

According to an English translation of Cass Beer's YouTube video descriptor, the company is looking for these "real heroes" who came out and cleaned the road "like it was your job".

It further said that the mishap was covered under insurance and no disciplinary action was taken against the driver.