The video has amassed 128 million views, with many Instagram users amazed at the talent of the school kid. 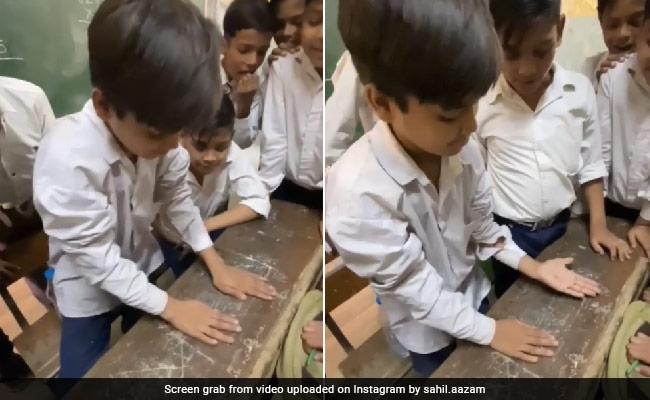 The school kid's classmates look mighty impressed by his skill.

A video of a school boy performing magic trick with tiny stones has gone insanely viral on social media. The video has become so popular that it been viewed 128 million times since being posted on Instagram on June 9.

Sahil Aazam, who posted the video, didn't add any caption. There is a single text insert on the video, which says "Talented student."

It shows the boy surrounded by his friends who are anxiously looking at the little magician. The boy then shows off his skill, transferring two tiny stones from one hand to another without anyone noticing it. And he does it not once but twice in the video.

The students around him are mighty impressed by the boy's talent, So is the internet.

"It's magic of speed," commented one user. "He looks like Indian justin Bieber look the features and hair," said another.

Another user claimed that he understood the trick and saluted the "little magician".

The video has been liked by more than six million people, including cricketer Shikhar Dhawan.

Earlier this year, another video of a man performing a magic trick with a sachet of sugar had left internet stunned.

The clip was first posted by @jadoy.ray on TikTok, but later surfaced on other social media platforms and quickly went viral.

It showed the man opening a sachet of sugar and pouring it into his left hand, which has a small opening. He then packs the sugar in his left hand and pops the empty sachet in his mouth before throwing the sugar crystals up in the air.

The man then grabs the empty sachet with his left hand and catches the sugar in his other hand. He finishes the trick by pouring the sugar back into the sachet from his right hand.