The man has been arrested on suspicion of robbery as well as two counts of attempted robbery. 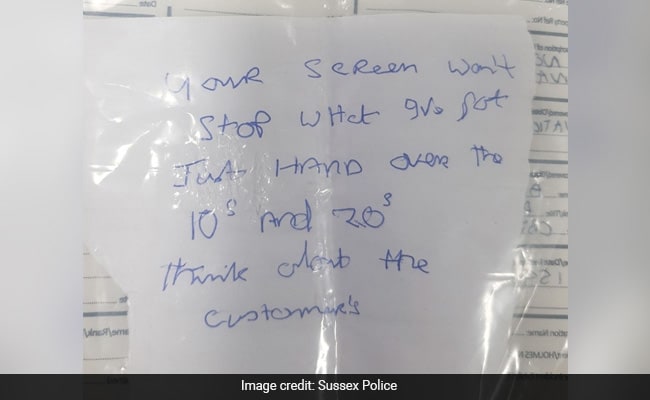 Bank employees had a tough time trying to read the note Alan Slattery handed them.

Most of us will remember being told by our teachers and elders to focus on improving our handwriting and it looks like a man from England chose to rather unwittingly ignore it. But years later, his illegible handwriting came to haunt him in the midst of a peculiar task -- that of robbing a bank. Alan Slattery, a resident of St Leonards in Hastings, probably thought that he would be making away with a few hundred pounds when he entered a bank in Eastbourne on March 18. However, things didn't go as planned as he went up to an employee and handed them a threatening note. There was one catch- the employee could not understand Mr Slattery's handwriting and so he did nothing.

Faced with this rather unusual predicament, Mr Slattery had no option but to return empty-handed, Sussex police said in a report published on its website. The staff at the Nationwide Building Society later managed to understand what the 67-year-old had scribbled and contacted the police regarding the same. The note, which was seized by the police read, “Your screen won't stop what I've got, just hand over the 10s and the 20s. Think about the other customers”. In addition to the note, CCTV footage from inside the bank was also reviewed by the police.

The note fiasco did not deter Mr Slattery, who targeted another branch of the bank on March 26. This time around, his note did the trick and the cashier handed over £2,400 in cash. “Slattery did not say anything, but left with the money,” the report said. CCTV from the bank shows a person that matched Mr Slattery's appearance, while he was also captured boarding a bus just moments after the robbery.

Following this, he made another attempt at a third bank, the NatWest ban. But he had to leave empty-handed on account of the cashier standing up to him.

He was soon arrested from the vicinity of his house on suspicion of robbery as well as two counts of attempted robbery.

Regarding the arrest, a police spokesperson was quoted by LADbible as saying, “A search of his address found some sticky labels identical to the label that had been handed to staff at NatWest bank, and a jacket that matched that of the man seen in CCTV from NatWest.”

Upon arrest, Mr Slattery pleaded guilty to all three offences. He was given a six-year extended sentence, consisting of “four years in custody and two years on licence”.