Rio: 10 Unforgettable Moments From The 2016 Olympics 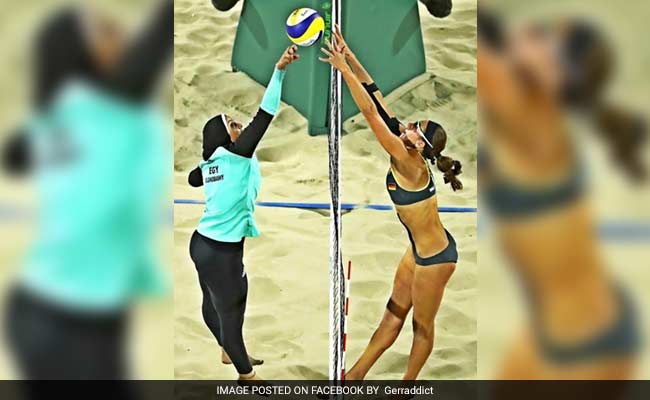 The action-packed fortnight at the Rio Olympics finally ended on August 21 with a grand closing ceremony in the Maracana stadium. It left us with memories of some stellar performances and a host of unforgettable moments.

'King of Sprint' Usain Bolt's triple triple, swimmer Michael Phelps' haul of medals, India's big wins by PV Sindhu and Sakshi Malik and other brilliant athletic achievements aside, here are 10 other moments that made these Olympics extra special:

1. When New Zealand and US runners helped each other finish their race after tripping
New Zealand's Nikki Hamblin and USA's Abbey D'Agostino won several hearts for their sportsmanship after they collided and fell in the 5000m heat, but helped each other finish the race.
The runners will now reportedly be honoured with the Pierre de Coubertin award for sportsmanship, handed out only 17 times so far in Olympic history.

Gymnasts Lee Eun-ju of South Korea and Hong Un-jong of North Korea take a friendly selfie together at #Rio2016pic.twitter.com/LBaKh9OTpn

4. Egypt play Germany in beach volleyball, a picture goes viral
The inclusiveness of the Olympic spirit was perhaps best exemplified by a photo of a women's beach volleyball match, played in very differing costumes - it showed Egypt's Doaa Elghobashy in a hijab and burkini playing against Germany's Kira Walkenhorst, dressed in a bikini.


5. Olympic proposals that won hearts
Diver He Zi of China not only won a silver at the Rio Olympics, she also went home with an engagement ring when her boyfriend and fellow diver Qin Kai proposed to her.
The diver had just stepped off the medal podium when Qin went down on his knee and offered He a ring, reports Associated Press. 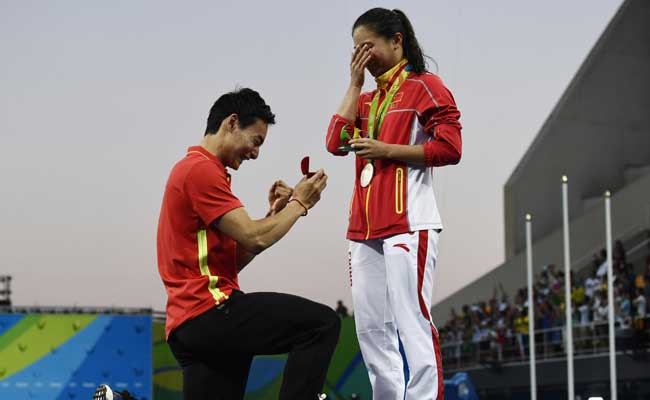 Another proposal to have made headlines was when Brazilian Olympics volunteer Marjorie Enya proposed to her girlfriend Isadora Cerullo, a member of Brazil's rugby team, on the field. 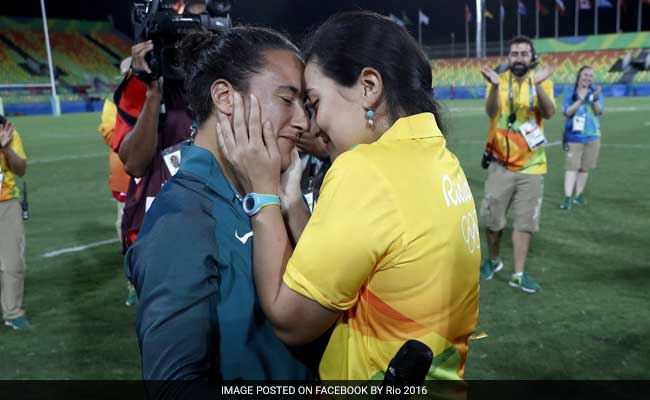 Love was definitely in the air this Olympics.

6. When a Kuwaiti shooter became the first independent athlete to win an Olympic gold
Kuwait's Fehaid al-Deehani won a gold in the men's double trap after competing as an independent athlete. He was forced to compete as a neutral since Kuwait has been suspended by the International Olympic Committee due to government interference in the sport, reports AFP. 7. When French race walker pooped himself mid-race but still carried on
Yohann Diniz wanted to finish his race so badly, he didn't let a case of terrible runs run him down. The French race walker was hailed on social media for continuing his race even after he pooped himself and began bleeding mid-race. He finished eighth and won social media for his do-or-die spirit.

8. When the water at the Olympics diving pool suddenly turned green
Social media had a field day when pictures showed the Olympics diving pool at the Maria Lenk Aquatics Centre in Rio turning from blue to green. Olympians had previously been recommended that they not put their heads under water.
The Rio officials eventually said that the water had turned green because someone had dumped 80 litres of hydrogen peroxide into the pool, reports The Telegraph. 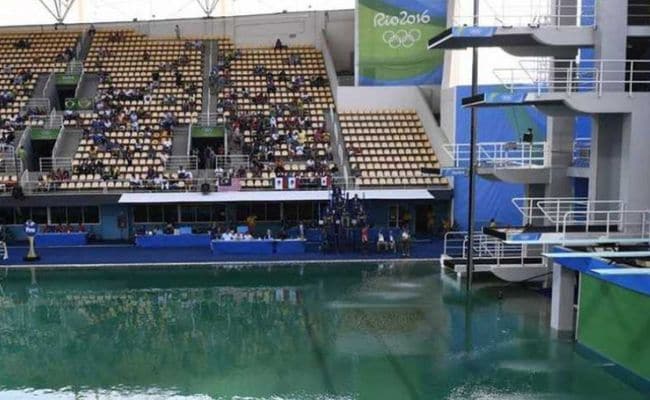 Mexican #SynchronisedSwimming team dancing to 'Aila Re Aila'
Too Good@akshaykumar@dalermehndipic.twitter.com/yrGjv4XWzt

10.   When Japan's PM Shinzo Abe dressed as Super Mario at the closing ceremony
With the next Olympics set to be held in Tokyo in 2020, Japanese Prime Minister Shinzo Abe came to the closing ceremony dressed as Nintendo video game character Super Mario.
"In only five minutes, the Japanese overshadowed the entire #ClosingCeremony. They absolutely Beyonced," said a Twitter user.

The prime minister of Japan appeared at the #ClosingCeremony as Mario. 2020 Tokyo Olympics are going to be pic.twitter.com/teK0AfuUKa