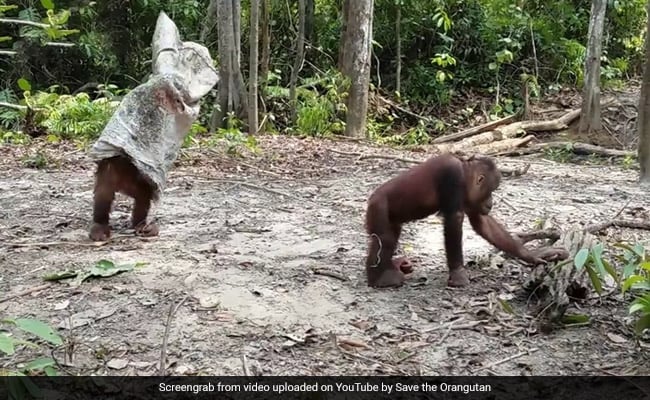 Watch as one attention-seeking orangutan tries to prank his friend.

If you are having a bad day, take a minute out and watch this video of one orangutan trying to prank another - because it's sure to bring a smile to your face. According to Indian Forest Service officer Susanta Nanda, who shared the old video on Twitter this morning, orangutans share at least 28 unique physical characteristics with human beings. Perhaps that is what makes them such a joy to watch, he wrote.

A joy to watch this video certainly is. It shows one goofy orangutan, wearing a sack over its head, trying to gain his friend's attention. The video was shared by Save the Orangutan on YouTube three years ago. According to the organisation, the video was recorded at the Nyaru Menteng Orangutan Rescue Center in Borneo. The center serves as home to orphaned orangutans who learn skills necessary for their survival in the wild before they are released into the forests of Borneo.

"The pranks our brothers play," wrote Mr Nanda while reposting the video on Twitter Wednesday. "Human shares at least 28 unique physical characteristics with orangutans but only 2 with chimps & 7 with gorillas. That perhaps makes them more human like & a joy to watch," he added.

The pranks our brothers play????

Human shares at least 28 unique physical characteristics with orangutans but only 2 with chimps & 7 with gorillas. That perhaps makes them more human like & a joy to watch. pic.twitter.com/fm52Vuo1Vo

The video has collected over 28,000 views and more than 2,500 'likes' since being shared on the microblogging platform. It has also garnered a ton of amused reactions:

It's so wonderfully innocent, mischievous and fun!!

According to the National Geographic, a 2009 study suggested that orangutans are our closest living relatives in the animal kingdom, and not chimpanzees are previously believed. The authors of the study based their conclusions on the close physical resemblance between orangutans and humans, saying that the primates and humans share at least 28 unique physical characteristics.