"Sam insisted to do some tik tok thingy," wrote Neetu Kapoor, sharing a TikTok video she made with her granddaughter. 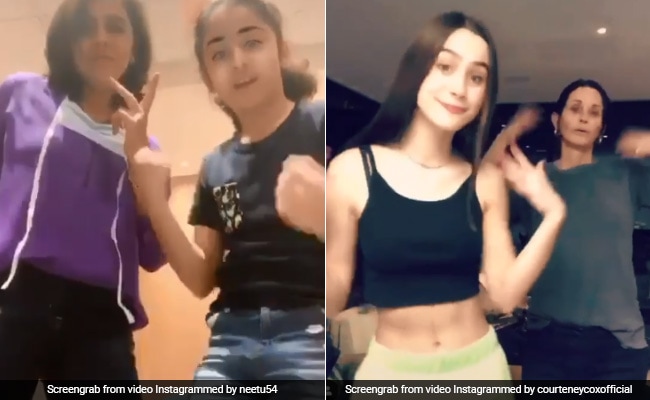 A number of celebrities are learning the ways of TikTok from their kids.

Teens and pre-teens across the world are using TikTok - the video-sharing app that burst onto the social media scene sometime in 2017 and quickly exploded in popularity. TikTok is wildly popular among Gen Z users, but with their parents and grandparents - not so much. Most millennials and Gen X users have experienced a bit of a learning curve with TikTok's world of dancing, lip-syncing and viral challenges - even celebrities. Luckily, their children and grandchildren are at hand to help them out.

These videos prove that when it comes to learning the ways of TikTok - celebrities, they are just like us.

Actor Neetu Kapoor took to Instagram this morning to share a TikTok dance video she made with her granddaughter, Samara, admitting that she had "no clue" about the "tik tok thingy" she was coerced into doing. "Sam insisted to do some tik tok thingy," wrote the 61-year-old. "Had no clue just followed to please her."

Samara Sahni is the daughter of Neetu and Rishi Kapoor's daughter, Riddhima Kapoor Sahani. Take a look at her video with her grandma below:

Neetu Kapoor isn't the only celeb learning how to TikTok. F.R.I.E.N.D.S star Courteney Cox, back in January, also shook a leg with her 15-year-old daughter, Coco Arquette, for the video-sharing platform. "Wanna see your child lose their patience? Do a TikTok with them," the 55-year-old wrote while sharing the video on Instagram.

Wanna see your child lose their patience? Do a TikTok with them. #familyaerobics

Meanwhile, Jessica Alba also took to TikTok this morning to share a video she created with her daughter.

Closer home, Shilpa Shetty, who had joined TikTok at the beginning of the year, occasionally treats her fans to videos with her son, Viaan.

As does actor Riteish Deshmukh, whose 'Bala challenge' with his sons Riaan & Rahyl had garnered more than 21 million views on TikTok.

As #housefull4 crosses the 150cr mark it's time to do the #balabalachallenge with my #halloween cubs Riaan & Rahyl -with mommy geneliad shooting it.

Which of these videos do you like best? Let us know using the comments section.