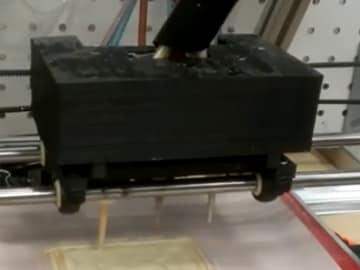 Mechanical engineer Anjan Contractor said that it took about 70 seconds to cook the pizza after the 3D printer finished doing its thing. (Photo courtesy: youtube.com)

Washington: An Indian-origin engineer claims to have developed a 3D printer that can print food and pizza for astronauts on long missions.

Mechanical engineer Anjan Contractor won a $125,000 grant by NASA last year to build a prototype 3D printer designed to provide astronauts a nutritious and comforting alternative to the canned and freeze-dried prepackaged foods they are currently stuck with.

According to Fastcoexist.com, Contractor's goal was to print a pizza with his 3D printer - and it looks like he has succeeded.

The printer would be able to lay out all the starches, proteins, fats, texture, and structure, spraying on flavour, smell, and micro-nutrients at the end, Contractor from Texas-based Systems & Materials Research Corporation said.

Promoted
Listen to the latest songs, only on JioSaavn.com
In his YouTube page, Contractor said that it took about 70 seconds to cook the pizza after the 3D printer finished doing its thing.