A viral tweet claimed that NASA had declared February 10 to be the only day when a broom could stand on its own. 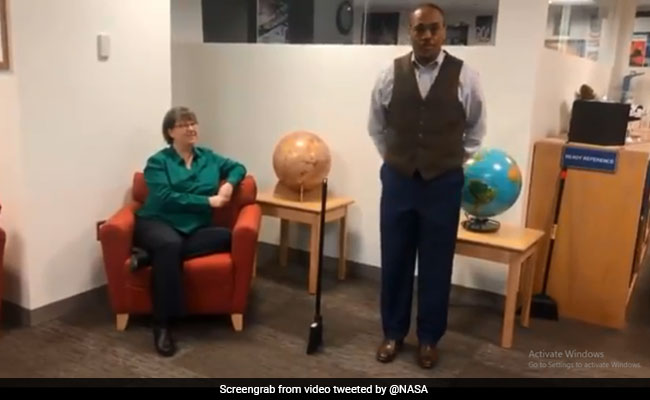 A screenshot from a video shared by NASA on Twitter.

NASA has been forced to step in and clarify that brooms can stand upright any day of the year - and not just on February 10.

The series of events that led to this curious clarification began when a tweet claiming that February 10 is the only day a broom can stand upright went viral online. The tweet claimed that NASA had declared the tenth day of February to be the only day when a broom could stand on its own "because of the gravitational pull".

The video accompanying the tweet has been viewed more than 8 million times, and it sparked a crazy viral trend on Tuesday when everyone tried balancing their brooms.

Okay so NASA said today was the only day a broom can stand up on its own because of the gravitational pull...I didn't believe it at first but OMG! 😭😭😭😭😭 pic.twitter.com/M0HCeemyGt

It turned out, however, that the claim was completely false. The truth is that you can make a broom stand on its own any day of the year, and there is nothing unique about the gravitational pull of February 10.

This is why NASA - USA's premier space agency - issued a clarification saying that "basic physics works every day of the year - not just February 10th."

On February 11, NASA shared a video of astronaut Alvin Drew and scientist Sarah Noble doing the #BroomstickChallenge - as the craze was dubbed. The video shows them balancing a broom upright as astronaut Drew says, "It's just physics".

Astronaut Alvin Drew and scientist Sarah Noble respond to the #BroomstickChallenge, showing that basic physics works every day of the year — not just February 10th. pic.twitter.com/4TTbI3mvzd

According to CNN, the reason a broom can stand upright without any support is because its centre of gravity is low, resting directly over the bristles. This means that if the bristles positioned like a tripod, a broom will stand upright any day.

Did you try the 'Broomstick Challenge'? Let us know using the comments section.