"So cute. Just love this," wrote Mirabai Chanu for the video. 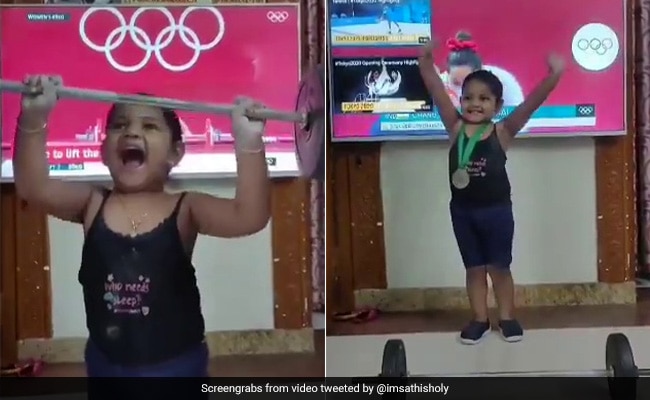 Mirabai Chanu became India's first medal winner at the Tokyo Olympics on Saturday, winning silver in the women's 49kg category. She has become only the second Indian weightlifter to win an Olympic medal after Karnam Malleswari. Since Saturday's big win, praise, rewards and recognition have been pouring in for the 26-year-old from Manipur. Thousands of tweets congratulating Mirabai Chanu on her Olympic win and hailing her an inspiration have emerged on social media - but there is one that stood out and caught the eye of the weightlifter herself.

Weightlifter Sathish Sivalingam took to Twitter on Monday to share a video of a little girl lifting, apparently inspired by Mirabai. The video shows the little one lifting a set of weights as a video of Mirabai at the Olympics plays in the background. The girl mimics Mirabai - right from applying powder to her hands before attempting the lift to waving afterwards. "Junior @mirabai_chanu this is called the inspiration," wrote Mr Sivalingam while sharing the clip.

Responding to the video, Mirabai Chanu praised it as cute. "So cute. Just love this," she wrote on Twitter.

So cute. Just love this. https://t.co/IGBHIfDrEk

The video has racked up over 2.4 lakh views on the microblogging platform, along with hundreds of comments.

Mirabai Chanu returned to India from Tokyo on Monday.

"To be a big player or achieve something big, you have to make sacrifices and I have made many sacrifices," she told NDTV after winning the silver medal.

To prepare for the quadrennial competition, Mirabai had to follow a strict diet, but with the medal in bag, she could treat herself to some long-denied delicacies. "First, I am going to have a pizza. It has been a long time since I have not eaten one," Mirabai Chanu told NDTV.

While Domino's Pizza announced that they would be treating Ms Chanu to "free pizzas for life", Union Minister Kiren Rijiju also celebrated her win with the Italian dish. On Monday, he shared a few pics which show Ms Chanu enjoying some pizza and wrote: "She was withholding her desire to eat pizza to maintain her weight in 49kg Weightlifting for the Olympics! Now, @mirabai_chanu has freedom to fully enjoy pizza till she starts her training for next Championship."

She was withholding her desire to eat Pizza to maintain her weight in 49kg Weightlifting for the Olympics!
Now, @mirabai_chanu has freedom to fully enjoy pizza 🍕till she starts her training for next Championship.#Cheer4India at the #Tokyo2020https://t.co/LrGOivcAkcpic.twitter.com/ZnUlVDQt2c

The weightlifter also wrote a message for her well-wishers and supporters after winning the medal in Tokyo. "I am really happy on winning silver medal in #Tokyo2020 for my country," she wrote on social media.

"It's really a dream come true for me. I would like to dedicate this medal to my country and would like to thank a billion prayers of all Indians which were with me during this journey."