A Raccoon Is Scaling A Tall Skyscraper, And It's Incredibly Stressful 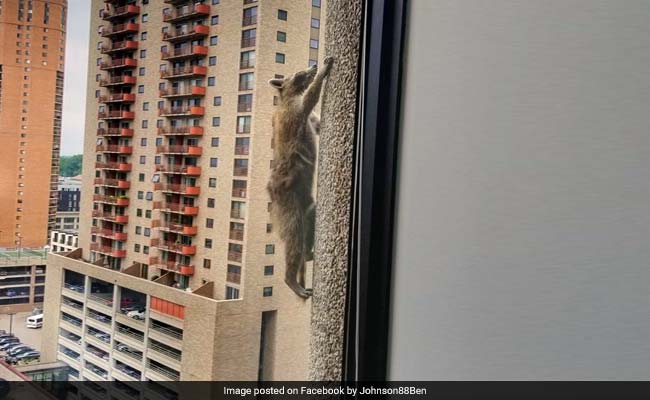 The critter climbed the UBS tower in St Paul, Minnesota and has been dubbed #MPRraccoon

President Donald Trump and North Korean leader Kim Jong Un captivated the world on Tuesday morning with a historic summit that seemed to lower the prospect of a devastating global war. Not long after, a Minnesota raccoon captured some of the attention and seemed to raise the prospect of a collective national heart attack.

The masked animal did so by scaling a St. Paul, Minnesota, skyscraper, a la Spider-Man, and in the process riveting - and terrifying - legions of humans who followed online. By late Tuesday morning, the critter was spotted a few stories up on a window ledge, its brownish body just a smudge on the building's concrete and mottled stone exterior.

By lunchtime, Minnesota Public Radio reporter Tim Nelson tweeted, the raccoon had climbed 12 stories up the UBS Tower - and things were getting stressful.

It had gotten stranded on a neighboring building two days before, Nelson said, "likely on an errant mission to raid pigeon nests on the skyway." And it apparently decided that the only way to go was up.

Soon the travels of the animal, dubbed #MPRraccoon, were being tracked nationwide. The local CBS affiliate began live-streaming the journey.

By midafternoon, the raccoon had ventured an additional 10 stories up, its claws somehow digging in enough to continue. On a window ledge on the 22nd floor, it paused to rest.

Despite their reputation as woodland creatures, raccoons have made themselves quite at home in North America's urban areas. But this fellow did not look terribly happy to be at these concrete heights.

Onlookers watched and took photos from the sidewalk far, far below.

Promoted
Listen to the latest songs, only on JioSaavn.com
The building's windows don't open, so assistance won't be easy. The raccoon, animal-control authorities said, will be trapped and aided upon reaching the roof. But first it has to make it that far.