The Incredible Reason These Pistols Could Fetch $1.5 Million At Auction

The pistols have been made with the Muonionalusta Meteorite 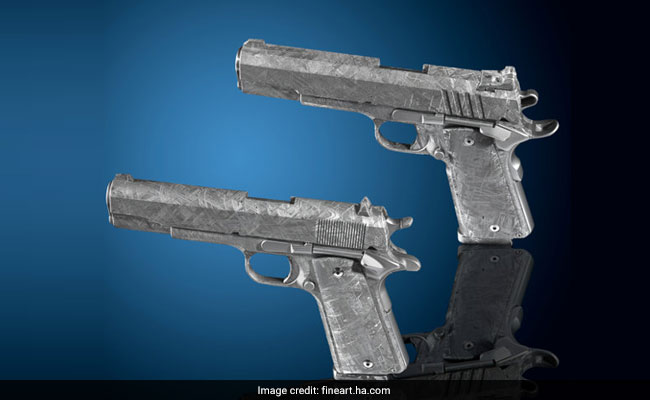 Two pistols made out of a meteorite are set to be auctioned this month.

A set of two pistols is expected to fetch anywhere between $1 - 1.5 million when they are auctioned later this month. The reason for their sky-high price? The pistols have been crafted out of a 4.5-billion-year-old meteorite.

Heritage Auctions, an auction house based in Dallas, USA, will be selling the two pistols, either individually or as a set, at an auction on July 20, reports Fox News. The reserve amount on the listing is set at $900,000.

The Model 1911 type pistols are made from the Muonionalusta Meteorite, which was discovered in Sweden in 1906. At 4.5-billion-years, the Muonionalusta is one of the oldest meteorites found on earth. Experts believe that it slammed into the earth about 1 million years ago.

"The majority of the metal in these guns is meteorite," Craig Kissick, director of science and nature at Heritage Auctions, told Fox News.

On its website, Heritage Auctions described the set of two meteorite pistols as "one-of-a-kind", adding that they have been modelled after the famous Colt 1911 Pistol.

Describing the experience of constructing a gun out of a meteorite, gunsmith Lou Biondo, who was commissioned to make the weapons, told Fox News: "If you mix carbon steel, aluminum, stainless steel and throw in some diamonds, that's what it felt like."