"You've got an animal that is part dog and part wolf. So you'll see that conflict in them, the dog in them wants to come to the person, but the wolf in them corrects that behaviour." 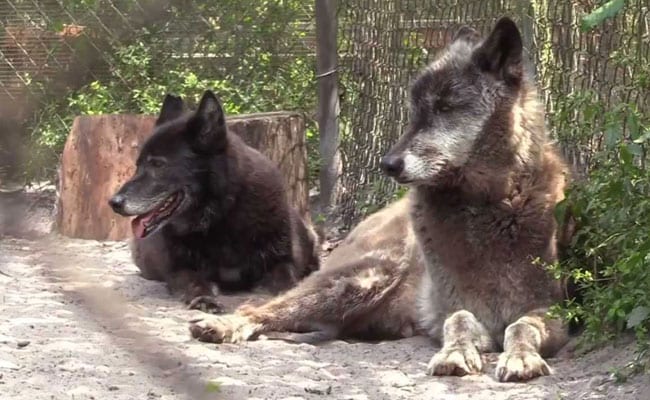 Yuki and Mohan at the Shy Wolf Sanctuary.

Fans of the super-hit fantasy TV series Game Of Thrones need no introduction to dire wolves. The now-extinct species is the largest of the genus Canis known to have existed. However, they still have distant relatives on earth - like wolfdogs. Two such wolfdogs are Yuki and Mohan, massive but gentle ambassadors for the Shy Wolf Sanctuary in Naples, Florida.

According to Ruptly, Yuki can get close to 6 feet when standing on his two legs. And despite looking like he stepped out of the world of Westeros, Yuki is actually one of the highest-content wolfdogs at the sanctuary. DNA testing puts him at 87.5% Gray Wolf, 8.6% Siberian Husky and 3.9% German Shepherd.

Yuki took the Internet by storm after a photograph of him dwarfing a sitting female volunteer went viral.

The founder of Shy Wolf Sanctuary, Nancy Smith, explains to Ruptly: "You've got an animal that is part dog and part wolf. So you'll see that conflict in them, the dog in them wants to come to the person, but the wolf in them corrects that behaviour.

"But when it comes to Mohan, he has a very beautiful wolfy look very large and majestic looking, but his got a dog's brain. So he just gravitates right to the first person that walks in."

The Shy Wolf Sanctuary is home to over 60 captive-bred or rescued animals. It currently also hosts pure-blooded wolves, foxes, a fennec and even a lion.