"While the doctors treated patients with medicines, we cured them with laughter," says the medical clown 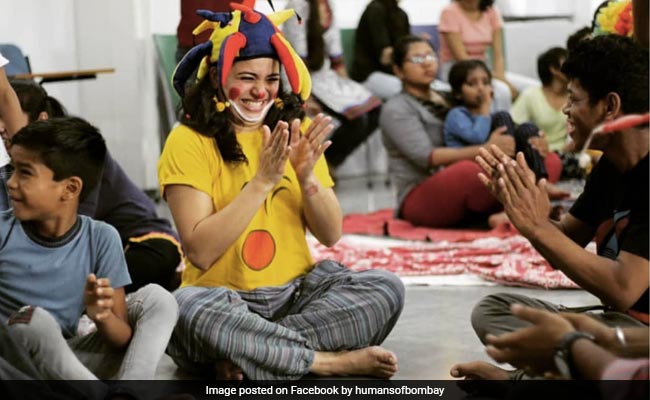 A typical work day for Sheetal Agarwal involves putting on a colourful wig and a red nose to cheer up recuperating children in hospitals. Ms Agarwal is the founder of Clownselors - a medical clowning group in which volunteers dress up as clowns to visit hospitals with the aim of providing emotional relief to patients. "Clownseling or medical clowning is a therapy used to reduce pain, anxiety and stress using humor," she explained in a blog post.

Delhi-based Ms Agarwal recently sat down with Humans of Bombay to talk about the ins and outs of her unique job, the people her group has helped and more. Ms Agarwal is a social anthropologist by training and a lecturer by profession, but she describes herself as a big clown at heart.

"I was at a retreat in 2016 when I met a 'medical clown'," she told Humans of Bombay. Inspired by the woman, who described her job as "visiting hospitals and making people smile", Ms Agarwal started reading about medical clowns. She was also inspired by Patch Adams, a movie about a doctor who treats patients using humour.

"I wanted to give medical clowning a shot. But it was still a new concept in Delhi," she said. So Ms Agarwal sought permission from the health ministry and, once she had it, began preparing for her first hospital visit.

She put up a post for volunteers, and although 33 people signed up, only five showed up on the day of the hospital visit. Though she was nervous, Ms Agarwal and the other volunteers put on their makeup and costumes and walked into the pediatric ward.

"I recall walking into the pediatric ward, forming a train with my volunteers and singing for the children. The atmosphere changed! Frowns turned into smiles and cries changed to laughter," she said.

"I'll never forget getting the most hopeful smile out of a patient who hadn't smiled all week! Kids started eating their meals and taking their medicines in exchange for balloons!"

Flush with the success of her first performance, Ms Agarwal began performing in Delhi hospitals on weekends along with the rest of the volunteers. "While the doctors treated patients with medicines, we cured them with laughter," she said, adding that hospitals often called them back, which only encouraged them further.

"That's when we started performing more frequently while still managing work," she said. "While I enjoyed what I did, I'd be told by relatives, 'You studied to become a clown? What a waste!' I dismissed them," Ms Agarwal explained.

Speaking about the work that she has done over the years, Ms Agarwal recalled two incidents that stuck in her mind. "I remember once, there was a girl on a ventilator," she said. I performed for her while she looked on. And would you believe it? She smiled and tried to get up!"

It was the first time that girl had moved in eight days.

In another instance, a specially-abled child raised her hand and threw a balloon back at Ms Agarwal. "Her father was overjoyed!" the medi-clown recalled.

Ms Agarwal says her job entails distracting children from pain while they are in hospital, and it's a role she has found to be very fulfilling - so much so that after five years, she quit her job to work full time as a medical clown.

Today, she and the Clownselors perform in hospitals, orphanages, slums and old age homes. "My parents proudly say, 'Our daughter saves lives'," says Ms Agarwal. "Every day, I tell my volunteers what Patch Adams taught me, 'When you treat a disease, you might win, you might lose, But when you treat a person, you'll win, no matter what the outcome!'"

The story of the Clownselors has struck a chord with social media users, racking up thousands of 'likes' and comments across Facebook and Instagram.

Many applauded the group for their selfless work. "What a heartwarming and inspirational story! I have tears welling up in my eyes! You are doing one of the noblest deeds," wrote one person.

"Thank you for doing what you chose to do," said another.

"Such a heartening way to spread joy among those who need the most," a Facebook user commented.