The New York Times report noted that Facebook began a "multipronged effort" to distance its founder, Mark Zuckerberg, from controversies and scandals. 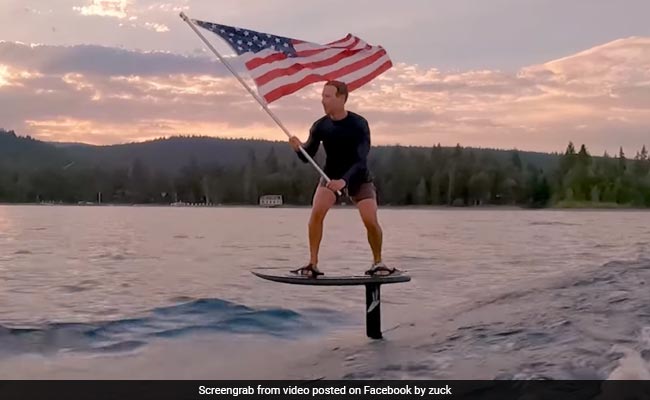 Mark Zuckerberg shared a video of himself hydrofoiling on the Fourth of July.

Mark Zuckerberg has shared a tongue-in-cheek response to a New York Times article accusing Facebook of promoting pro-facebook stories on its news feed. The report by Ryan Mac and Sheera Frenkel alleges that the Facebook chief executive signed off last month on a new initiative to show people more positive stories about the platform - but Mr Zuckerberg, instead of refuting the allegation, chose to respond by focusing on the difference between surfing and hydrofoiling.

The New York Times report noted that Facebook began a "multipronged effort" to distance its founder, Mark Zuckerberg, from controversies and scandals. As part of the image-cleaning exercise, Mr Zuckerberg's social media posts also saw a marked change. "Mr Zuckerberg's posts have recently featured a video of himself riding an electric surfboard with an American flag..." one sentence in the 1800-word report read.

However, the Facebook chief took offense at the misidentification of his hobby and called out New York Times in a post shared on Facebook this morning.

"Look, it's one thing for the media to say false things about my work, but it's crossing the line to say I'm riding an electric surfboard when that video clearly shows a hydrofoil that I'm pumping with my own legs," he wrote.

Hydrofoiling is a new type of water sport in which a wing-like structure under water is used to create lift. On the Fourth of July, Mark Zuckerberg had shared a video which shows him hydrofoiling. There's a wing under the water that I'm riding that pushes the board into the air," he explained in the comment section of his post. "It's a lot of fun. There's an electric-powered version that you can get, but in this video I'm riding a regular foil board and surfing a little wave."

Mr Zuckerberg's tongue-in-cheek rebuttal of the New York Times report - which has since been updated to correctly identify the water sport - amused many on Facebook.

"Rofl. It's not even an e-foil!!!" one Facebook user wrote. "Exactly," Mr Zuckerberg replied.

"Mark you've been super laid back and funny these last few months. Lol what changed in your life? What's your secret?" another asked, to which he replied by saying, "I just decided to focus more on some of the awesome things we're building, and doing more fun things with my family and friends."

However, report author Ryan Mac was surprised to see Mr Zuckerberg's reaction to the article. "So.... he read the story and this is what he's disputing," Mr Mac wrote on Twitter.

So…. he read the story and this is what he's disputing https://t.co/Jned0QgeIbpic.twitter.com/HDkMTVoRcR

"Zuckerberg has said nothing publicly about the WSJ investigations and the only thing he's disputed in our story about him wanting him to separate himself from scandals was a post about his hydrofoil, which... ok," he added.

Zuckerberg has said nothing publicly about the WSJ investigations and the only thing he's disputed in our story about him wanting him to separate himself from scandals was a post about his hydrofoil, which… ok.

The story has been updated too. https://t.co/9beKRsZkPKpic.twitter.com/Ojt0OtS2UU

The Wall Street Journal last week published reports which show that Facebook failed to properly address problems and prioritized profits amid a slew of misinformation on the platform. According to Reuters, the Wall Street Journal, citing a review of internal company documents that included research reports, online employee discussions and drafts of presentations to senior management, said that although Facebook researchers have identified "the platform's ill effects," the company failed to fix them.

Punjab Kings Took A Dig At Rajasthan Royals. Guess Who Had The Last Laugh?