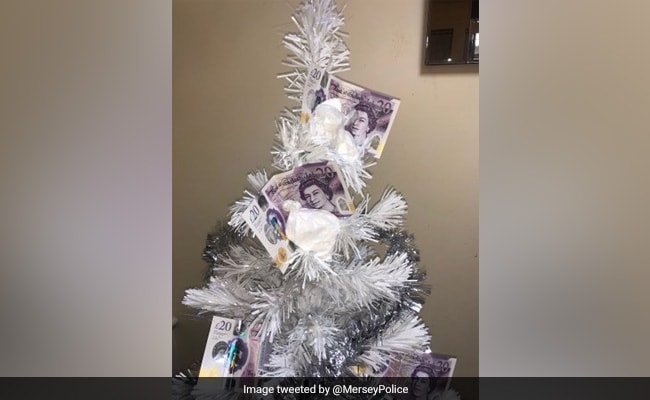 Is it possible to go to jail for Christmas tree decorations? You might say no. But what if the decorations are actually drugs? That's exactly what happened to a drug dealer in the United Kingdom. The man's decision to decorate his Christmas tree with small packets of drugs and cash came back to haunt him. Marvin Porcelli, the dealer, had taken photos of the Christmas tree decorations on his mobile phone. The images were eventually retrieved by the police, who added them to a huge pile of evidence proving his involvement in a major narcotics ring.

The police in Merseyside in northwest England said Porcelli was arrested as part of a bigger operation, named Overboard. The police shared the information on Twitter. The thread also had some lessons for potential drug traffickers.

The police said when people start getting high on drugs, their taste in festive home design “goes out of the window”.

But it seems that when you start getting into Class A drug trafficking, your taste in festive home design goes out of the window ????‍♂️ pic.twitter.com/OW6ic3DswT

In a subsequent tweet, the police shared the photo of the Christmas tree with the cash and drug packets.

Can you imagine our surprise when we searched the mobile of Wavertree drug dealer Marvin Porcelli and found this?! ???? pic.twitter.com/CvLOiFOwyJ

Then, in another tweet, the police said they caught Porcelli during a year-long operation named Overboard, “which is apt as that's how we'd describe the Christmas decor snapped on his phone”.

We caught Porcelli as part of Operation Overboard, which is apt as that's how we'd describe the Christmas décor snapped on his phone (what's wrong with a nice spruce with some simple baubles and tinsel?) pic.twitter.com/voyA3K89Qm

Besides Porcelli, eight others were also caught during the operation and the police seized several “interesting parcels” that included drugs worth 1.3 million euros (about Rs 10.90 crores).

“Joking aside, these men were serious criminals, highly organised and some were well armed. They just didn't reckon on the expertise, perseverance and capabilities we and law enforcement throughout the UK and Europe possess,” the police said.

Joking aside, these men were serious criminals, highly organised and some were well armed. They just didn't reckon on the expertise, perseverance and capabilities we and law enforcement throughout the UK and Europe possess. pic.twitter.com/oh6uQ6qkd7

Some of those arrested used encrypted technology to communicate. They were sentenced to a total of more than 89 years in jail, the police said.

Today a judge gave them 89 years in prison where, we're guessing, the Christmas trees are a little less bling. Ho-ho-ho! ????#OpVeneticpic.twitter.com/fcTkrQgJyy

According to a report in the Daily Mail, Porcelli was arrested in March after the police raided his partner's home in Liverpool and seized about a kilogram of cocaine. When officers asked Porcelli if there were any drugs on the premises, he said “Class A medicines”. Then the police discovered two containers, each containing over 500 grams of cocaine, between the pillows of a bed. The estimated worth of the haul was around 37,000 pounds (about Rs 37 lakhs).

A few weeks later, when the police raided Porcelli's house, they found wraps of what they described as “white powder”. They also found numerous phones. The photo of the Christmas tree was retrieved from one of those phones.

Several people lauded the Merseyside police for uncovering the nexus and expressed their surprise over the “decorated” Christmas tree photo.

Another user said they thought the criminals were planning a “white Christmas”.

Marvin Porcelli got a jail term of seven years and six months.