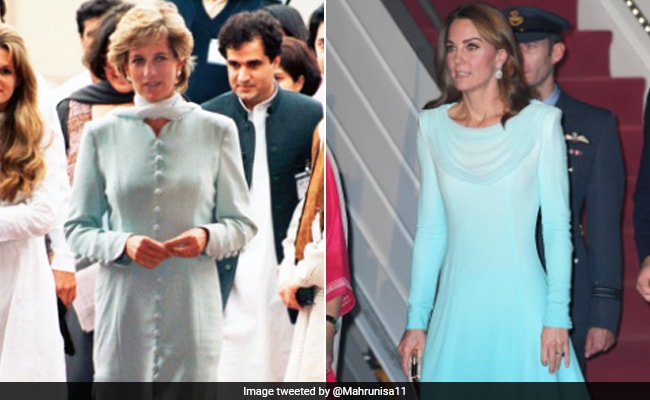 As the Duke and Duchess of Cambridge arrived in Pakistan on Monday for a five-day visit, what struck many was the choice of Kate Middleton's outfit. The 37-year-old wore an outfit that many found similar to what her mother-in-law, Princess Diana, chose to wear when she visited the country in 1996. Kate opted for a light blue dress with matching pants - a modern take on the traditional churidaar kameez.

The light blue ombre outfit closely resembled the dress that her husband's late mother, Princess Diana, wore during her visit to Pakistan in 1996. She too wore a tunic with pants in a similar shade of blue.

According to People, Kate's outfit was designed by Catherine Walker - a favourite of Princess Di's. Twitter was quick to notice the resemblance.

Simplicity is the ultimate sophistication.
A fierce combination of grace and beauty.💞
Now KATE then DIANA #RoyalVisitPakistan#KateMiddletonpic.twitter.com/eKFUCAQQuM

Kate Middleton channelled Princess Diana's style on #RoyalVisitPakistan. Kate looked elegant in a turquoise shalwar kameez by Catherine Walker, one of Diana's favourite designers.Diana wore during her visit to Pakistan in 1996. #WelcomeToPakistanpic.twitter.com/bSxUTTGcl5

I am actually getting emotional and missing Lady Diana a lot today!
Kate and William are doing so well keeping her legacy alive.
Diana loved Pakistan. #KateMiddleton#whatkatewore#PrinceWilliam#RoyaltourPakistan#royalsvisitpakistan#ladydiana#PrincessDianapic.twitter.com/pxFBC4IJYU

Comparisons continued on Tuesday when Prince William and Kate stepped out for their first full day of the royal tour. The couple visited a school in Islamabad. Kate wore a traditional periwinkle blue Pakistani suit by designer Maheen Khan, featuring hand-embroidered detailing according to Hello Magazine.

The traditional Pakistani salwar kameez, paired with a dupatta, bore a striking resemblance to Princess Diana's dark blue suit that she wore during her Pakistan visit. Kate Middleton's sapphire and diamond engagement ring, worn with the suit, was also Princess Diana's engagement ring. Social media users were quick to point out the similarities between the two royals.

Kate's outfit today for her visit to Islamabad Model College for girls is such a hard throwback to this Diana outfit from her last visit to Pakistan! #RoyalVisitPakistanpic.twitter.com/WFwzaiTwXf

In a statement, the Kensington Palace said: "This is the most complex tour undertaken by The Duke and Duchess to date, given the logistical and security considerations." The royal tour will wrap up on Friday.