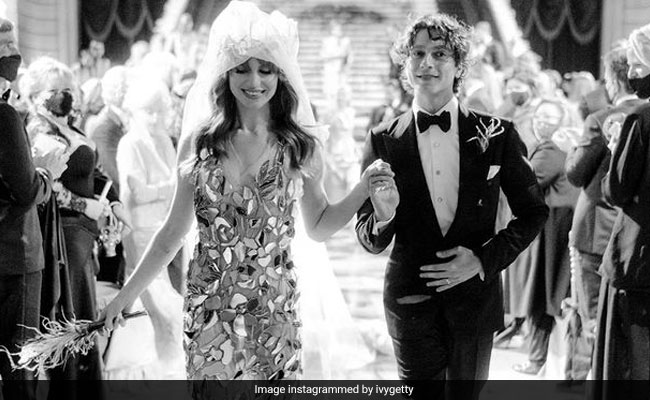 "When my beloved grandmother passed away, I knew I wanted to have the wedding in my house to honor her," Ivy said. Ivy was raised by her grandmother Ann, who died in 2020. A noted philanthropist and interior designer, she designed each room of the Getty Mansion, where the wedding reception was organised.

According to CNN, the ceremony itself took place on the ornate steps of San Francisco's City Hall, which was completely transformed by Ivy Getty's wedding planning team. Bright teal and pink Persian rugs were used to carpet the rotunda, while archways were draped with turquoise and rose pink velvet drapes.

I wanted to channel Ann," event planner Stanlee Gatti said. "The colors, patterns and fabrics were a nod to Ann."

US Speaker of the House Nancy Pelosi officiated the ceremony, while actress Anya Taylor-Joy (of The Queen's Gambit fame) was maid-of-honour. The rings were delivered by Ivy's pet Chihuahua, Blue, who was also dressed up for the occasion.

After the ceremony, guests headed for the Getty Mansion, where a rose garden was erected for the DJ dance party while bars and buffets cropped up throughout the mansion.

For the reception, Ivy changed into second Maison Margiela gown. Vogue contributing editor Hamish Bowles described it as "a tattered Madame Vionnet gown in wisps of delicately embroidered pale pink chiffon and tulle, it was like a breath and moved so beautifully for the first dance."

The Saturday wedding was the culmination of a star-studded weekend that kicked off with a welcome party on Thursday night where Earth, Wind & Fire performed. On Friday, guests also attended a picnic lunch where Ivy wore an archived Alexander McQueen gown.

Ivy reportedly met husband Tobias through a family member first, before they ran into each other at the Paris Fashion Week. Tobias surprised her with a proposal in Capri.