"It Was Terrifying": Woman Finds Live Snake In Bag Of Potatoes

"It was terrifying, I still can't sleep," says Marissa Davidson. 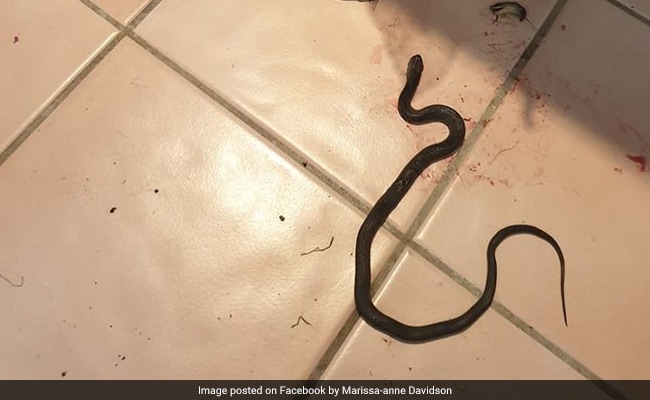 Marissa Davidson shared a pic of the snake on Woolworths' Facebook page.

A woman in Australia was left terrified after finding a live snake in a bag of potatoes. Marissa Davidson of New South Wales purchased the 4kg bag of potatoes last Friday from Woolworths, a chain of Australian supermarkets.

Ms Davidson told 9 News that she discovered the snake while grabbing potatoes from the bag, and added that the incident gave her a huge fright.

"I opened it and I grabbed two potatoes out, and I was like, 'Oh no, I'll do three' and turned around to get the other one and it jumped out," she said.

Once out of the bag, the snake immediately started slithering towards her five-year-old son Chase, who has a congenital heart defect. "He has got hypoplastic left heart syndrome, which is half a heart, and it could have made him very sick," said Ms Davidson.

The mother then sprang into action to kill the reptile. "I grabbed my son then ran and got my vacuum pole and smashed its head off,' she said, according to Daily Mail.

"It was terrifying, I still can't sleep."

Ms Davidson also shared a photo of the snake and the bag of potatoes where it was found on Woolworths' Facebook page, where the company responded with an apology.

In response to the post, the supermarket chain said its quality team was investigating the incident. "We're very concerned to see what you've found in your bag of potatoes. As you're aware through your contact with our Advocacy team, this has been passed on to our quality team for their immediate attention," Woolworths said on Saturday. "Thank you for taking the time to let us know about this and once again we apologise for your experience."

Woolworths, however, refused to refund the customer.

According to 9 News, Stuart McKenzie from Sunshine Coast Snake Catchers 24/7 said the snake appeared to be a marsh snake, which are mildly venomous.