Viral: A 2008 Video Of Elon Musk. He Was Broke, Tesla Was Losing Money 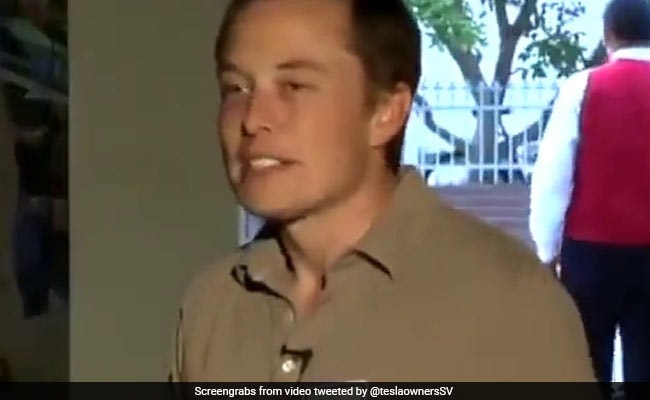 In a video from 2008, Elon Musk speaks about Tesla and more.

A video from 13 years ago in which Elon Musk explains why Tesla cars are so expensive has resurfaced online and is currently going viral on Twitter. Elon Musk's Tesla is today counted among the world's most valuable auto companies - but that wasn't always the case. In 2008 - which Mr Musk has previously said was the "worst year" of his life - Tesla was losing money.

According to Space.com, the SpaceX and Tesla Motors CEO told 60 Minutes correspondent Scott Pelley in an interview that his Falcon 1 rocket had failed, while the Tesla Roadster, a two-seat sports car, was losing money quickly. At the time, Mr Musk himself was in debt.

"To save Tesla, Musk needed millions from investors. His fortune was gone," Mr Pelley said.

It was at the end of this year that Elon Musk stood in front of an audience of around 300 people from the film, television and music industry for an event organised by The Hollywood Hill and spoke about Tesla's electric cars.

A video from the December 2008 event has gone viral after being shared on Twitter yesterday by Tesla Owners of Silicon Valley. "Whenever somebody buys a Tesla Roadster sports car... every penny that Tesla makes goes into the development of a smaller, lower-cost vehicle," says Mr Musk in the video. He further countered criticism that Tesla's expensive electric vehicles are only "toys for rich people" and don't actually help the environment, explaining that it takes time to optimise new technology.

.@elonmusk discussing electric vehicles in 2008 as tesla was nearly out of cash. pic.twitter.com/q41Tw9bfx9

The video has racked up over 2.2 million views on the microblogging platform, along with thousands of 'likes' and retweets.

"My restaurants are struggling to stay open but when you have vision and you refuse to stay down, it's videos like this that push me harder. Good on you Elon. Never stop believing," wrote one person in the comments section.

"The biggest entrepreneur of our time," another remarked.

You can watch the full presentation here.