The two anglers run away, abandoning their catch for the crocodile 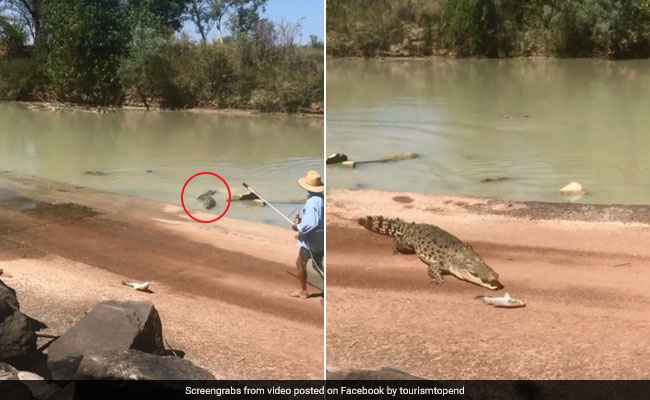 A crocodile rushed in to steal a fish from an angler's line in Australia.

A hungry crocodile snatched a fish right from an angler's line near a river bank in Australia. Shocking footage of the incident has gone viral online.

In the video, shared on Facebook, a woman is seen hooking a big fish and dragging it out of water. Her partner runs up to her with a net. However, before either of them can do much, a massive saltwater crocodile swoops in to steal their catch. The reptile is seen rushing out of water to snatch the fish, reportedly a barramundi.

The two anglers run away, abandoning their catch, as the crocodile chomps down on its meal and returns to water just as quickly as it came out.

According to Fox News, the incident took place at Cahills Crossing in the Kakadu National Park in Australia's Northern Territory. "Another reminder to always be croc wise when fishing, swimming and near waterways when in the Top End!" wrote Tourism Top End, who shared the video on Facebook.

Since being shared online on Saturday, the video has collected over 12,000 reactions and more than 7,000 comments.

"I found it safer to buy my fish and go to the crocodile parks to feed the crocs," joked one person in the comments section. "Crazy, has she got a death wish? I've been there and there are hundreds of crocs lurking in the water," said another.

Cahills Crossing in Australia is infamous for its crocodile-infested waters. According to News.com.au, this breeding ground for saltwater crocodiles is considered to be one of the most dangerous bodies of water in the country.