"He hasn't had the chance to do this before. Needless to say, he enjoyed it." 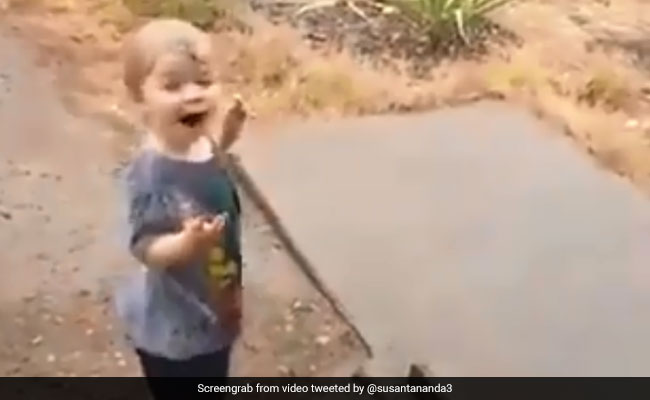 A delightful video shows an 18-month-old marvelling at the rain.

A heartwarming video, filmed in Australia, has captured a toddler's delight on seeing rain for the first time ever. The video shows 18-month-old Sunni Mckenzie jumping into puddles and dancing in the rain at his family's farm in New South Wales, reports 9 News.

Heavy rains swept parts of Australia after months of dry spell on Thursday, bringing hope that some of the country's raging bushfires would be extinguished by it. Australia has been battling its worst bushfire season on record since September last year. The fires have already claimed 29 lives, killed millions of animals, destroyed homes and forests and polluted the air.

In the middle of this, rains are bringing hope and smiles to the country. Sunni Mckenzie's delightful video was filmed by his mother Tiffanie Mckenzie, who shared it with 9 News. It was posted on Twitter by Indian Forest Services Officer Susanta Nanda.

"Heavy rain in Australia is bringing joy to the drought stricken continent. This 18 month old boy is thrilled seeing it for the 1st time," wrote Mr Nanda while sharing the video on the microblogging platform. "Yes. Rains after 18 months is paradise."

Heavy rain in Australia is bringing joy to the drought stricken continent. This 18 month old boy, is thrilled seeing it for the 1st time.
Yes. Rains after 18 months is paradise 👍🏻 pic.twitter.com/4TRY1vgkrp

"When the rain came we raced outside to move the plants out and he just kept walking out to the rain and just stood in it," Sunni's mother told Daily Mail Australia.

"He hasn't had the chance to do this before. Needless to say, he enjoyed it."

Ms Mckenzie also added that their home in Scone, NSW, had not seen heavy rain for the past three years - only light sprinkles. "We haven't had a rain event like this in over three years. We're hoping it keeps falling over the next five days," she said.

Many other social media users also celebrated the arrival of rain.

It's finally raining in Australia 😭❤🙏🏽

"Downpours have already helped to extinguish 32 bushfires..number of blazes fell from 120 to 88..It means the end may be in sight for exhausted firefighters who have battled deadly fires for more than 3 months."

Our Country now Rejoice 🙏🏻
It's pouring down 🌧️💛💚#AustraliaRain#Australiapic.twitter.com/2LNnljWN6L

So wonderful to see rain today. Lots of rain. So different from 2 weeks ago when driving this route. #gratitude#rain#regionalnsw#australia#weatherpic.twitter.com/WrFRFEMjrK

According to Reuters, meteorologists and water authorities have warned that the rain might bring relief, but heavy downpours also bring the risk of landslides and water pollution.